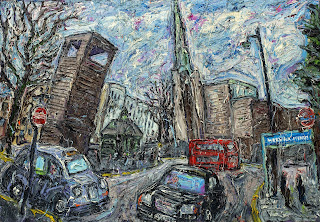 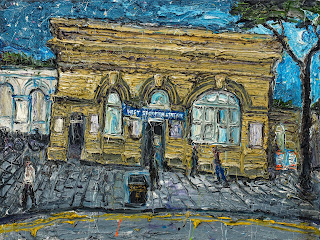 Following his degree in Fine Art and Illustration at Bristol, Ross Ashmore spent the next two years illustrating for publications such as the Radio Times. He then went into commercial art, working as a graphic designer for the next twenty years.

Ross says he has no regrets choosing this career path. “The mass produced commercial world is so concerned with perfection – 'everything was airbrushed out!' In contrast I began to appreciate being different, embracing individuality – freedom of expression. This view is what drives and inspires me today. It's the ordinary things in life, the mundane that I want to catalogue in my work. With all the relentless change, very soon, we may forget the way things were.”
As a Christian, who is also an artist, he says it is great to share both together with others. His work is best described as expressive. He works in oils on canvas in an impasto style and enjoys portraying urban landscapes.
Posted by Jonathan Evens at 09:32