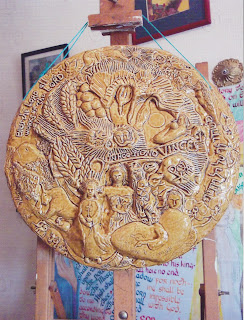 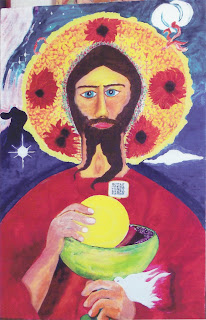 Jim Insole lives in Neath, South Wales. He became a committed (R.C.) Christian in 1966 and soon became aware of a facility to represent devotional religious and philosophical ideas graphically. He has been engaged in religious art, much of it ceramic, since 1975. Before this he was a gardener and has continually been a folk musician since the late 1950's.

He studied art and pottery during the '80's, setting up a small, basic pottery workshop in the early '90's. Here he evolved the mandala-like bas-relief plaque form which may be seen above. He graduated in theology in 2005 from Lampeter College (University of Wales), with an emphasis on scriptural studies (with Greek and Hebrew), and Early Church History. He retains an abiding interest in cosmology and philosophy.

Since 2005 he has resumed potting and painting. At root, his work seeks to reconcile traditional (but not fundamentalist!) doctrine with current perceptions of the cosmos and history, anthropology etc. Even more importantly it seeks a peace, a shalom between what is believed, what is intellectually perceived and what is devotionally, existentially and emotionally felt.
Posted by Jonathan Evens at 12:15