Passion collections: Downloads and use 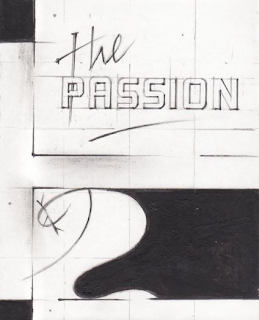 There have been 365 downloads to date from The Seed of Henry Shelton and Jonathan Evens collections of Passion meditations and images, the most popular being The Passion pdf. Use has been made of these collections, often during Lent and Holy Week, at churches including Cafe Church Kingsley, Churches Together in Cleadon, St Gabriel's Aldersbrook, St John's Seven Kings and St Margaret's Barking.

Churches Together in Cleadon used The Passion meditations and images for their Good Friday walk. Lay Anglicana used a Mark of the Cross image for their post of intercessions for the Second Sunday of Easter. Rev. Steve Santry used Mark of the Cross at Cafe Church Kingsley and wrote that its "stunning artwork and thought provoking words will open up the events around Easter in a new and imaginative way."
Posted by Jonathan Evens at 15:51 No comments: Links to this post 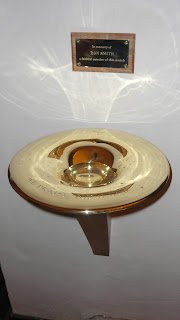 The Holy Water Stoup designed by Mark Lewis for St Margaret’s Great Ilford has been awarded a ‘Commended’ certificate in the annual Design Awards of the Diocesan Advisory Committee for the Diocese of Chelmsford.  The judges commented on 'the simple and elegant design' of the Holy Water Stoup which they said 'has been well crafted.'

Mark has explained that the design of the Holy Water Stoup, which is made from oiled oak and polished brass, 'is inspired by a rising and opening hand in a gesture that suggests invitation or something offered and given in love, reflecting the mission of the Church.' The engraved inscription on the stoup reads as, ‘We praise you O God.’ The Stoup was dedicated by parish priest Fr. Stephen Pugh on Sunday 25th March 2012 in memory of Mr Ron Smith. 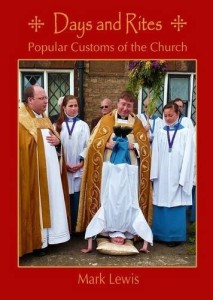 Mark has recently had his book entitled Days and Rites: Popular customs of the Church published by the Heart of Albion Press:

"People go to church to worship and, as is often quipped, to be 'hatched, matched and dispatched'. Yet these quintessential rites have been adapted in all sorts of ways by parishioners and clergy up and down the country, while a great number of 'blessings' and other services that are quite specific to individual churches are performed annually. Collectively, they create a rich variety of traditions, many of which are only known about locally.

Some of these liturgical traditions have survived unbroken over many centuries, others have been revived after a break during the twentieth century – while yet more continue to be invented. Some of these more recent traditions – such as Harvest Festivals and Christingle – are now so ubiquitous that many churchgoers are unaware of a time when they were not part of the yearly cycle of customs.

By drawing together, for the first time, detailed information about these popular customs of the church, Mark Lewis hopes to stimulate further interest, research and recording of these remarkable events."

Mark's Drawing the Line exhibition at the School of Jewellery in Birmingham has just closed. The exhibition represented the current output of an ongoing drawing and mark-making project in the form of a series of weekly visual diaries. These sketchbook journals are a response to the urban and rural landscape observed on Mark’s train journey which is undertaken every week from London Marylebone to Birmingham Snow Hill (and vice versa) on the Chiltern Mainline. This attempt to build up a different form of visual intimacy with a continually changing landscape viewed in all directions began over two years ago. The project has challenged the relationship between visual perception and mark-making and encouraged new ways of seeing which are essential when working spontaneously under self-imposed pressure.

The exhibition presented all of the visual diaries in both original and digitised forms. Each sketchbook journal is an unedited response to a section of the urban and rural landscape observed on Mark's journey and attempts to capture a sense of place through immediate felt response, memory and cumulative knowledge. Every journey has prompted a different way of engaging with the surrounding landscape. Some sequences are overlaid with responses from subsequent journeys; others are worked up later from recalled fragments, while more recent series are semi-abstractions generated almost totally from memory. Earlier figurative studies have gradually given way to the use of visual metaphors capturing landscape gestures, hidden structures, energies and patterns.

Mark is an industrial designer specialising in product design, jewellery and silversmithing. He has taught drawing and design in adult, further and higher education for 30 years. Formerly a principal lecturer in the Sir John Cass Department of Art Media and Design at London Metropolitan university, he is currently lecturing part-time at BIAD, Birmingham and the Goldsmiths Centre in London. Drawing has always been central to his creative practice and he is currently pursuing personal projects which focus on gestural drawing and mark-making.
Posted by Jonathan Evens at 13:49 No comments: Links to this post 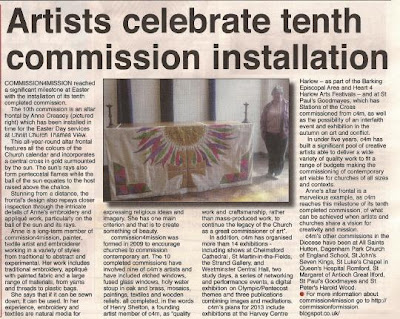 Anne Creasey's marvellous new altar frontal at Christ Church Thames View has been featured in the Barking & Dagenham Post and The Month, the newspaper for the Diocese of Chelmsford. Click here to read the story in The Month which focuses on the altar frontal as commission4mission's 10th commission in our first five years of existence.

Click here to see the story and photo in the Barking & Dagenham Post where Rev. Mina Smallman, Vicar of Christ Church, says: “The congregation loved it. The church building has a practical sense to it, no stained glass windows; all we had was a wooden altar. The frontal has given the altar a wow factor.”
Posted by Jonathan Evens at 10:35 No comments: Links to this post

c4m at the Arts Festival for the Barking Episcopal Area 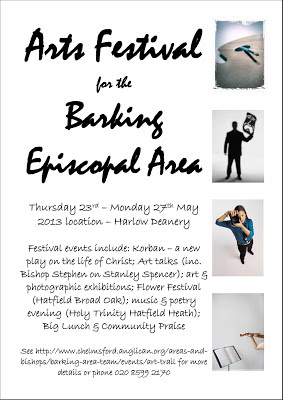 commission4mission will be mounting an exhibition using a shop unit in the Harvey Shopping Centre Harlow from Thursday 23rd to Monday 27th May as part of the Barking Episcopal Area Arts Festival and Heart 4 Harlow Festival. Also in the Festivals will be art talks by Bishop Stephen Cottrell (Stanley Spencer) and Mark Lewis (John Piper) plus a performance evening at Holy Trinity Hatfield Heath which will include a range of local musical contributions plus music from Colin Burns and poetry from Jonathan Evens, Mal Grosch and Jane Grell. 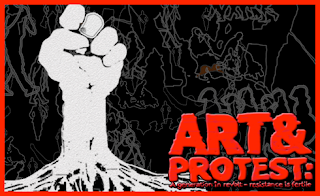 Pouka is contributing work to Art and Protest: Resistance is fertile, a Guerilla Galleries show at the Daniel Libeskind Space (166-220 Holloway Road, Islington N7 8DB) from 3rd to 5th April. Evenings from 18:00 to 20:00 when booking is required. No booking required for day-time entry (11.30am - 4.30am).

Documenting and celebrating the passion, pain, and power of protest through film, photography, fine art and more exponents than you can wave a placard at. Exploring scenes and re-examining snapshots of demonstrations and protest actions from living memory captured, re-told and innovatively delivered by a carefully selected band of artists and creatives in true Guerilla Galleries style.

This three-day show offers candid insight, fresh perspectives and levels of honesty previously unseen in themed shows of this nature. Art and Protest is not about choosing or taking sides, it's about artists telling tales and allowing an audience to decide.

Guerilla Galleries seek to engineer, produce and curate an annual series of exclusive shows, exhibitions and events. They provide a platform for emerging artists and talented creatives to showcase and bring their work to new audiences.
Posted by Jonathan Evens at 23:59 No comments: Links to this post