commission4mission's AGM will be held on Saturday 19th June at All Saints West Ham beginning at 10.30am. The AGM will include the opportunity to view our initial exhibition in our ongoing exhibition space at All Saints, election of committee members and a substantive discussion of our strategic direction based on Helen Gould's review of c4m and her strategic direction paper.

Another date for diaries is our next networking event which will be on Saturday 17th July at St Paul's Goodmayes beginning at 2.00pm. We want this to be an event at which each of us can find out more about the work of other members, so are proposing that we do this as a 20x20 event. PechaKucha 20x20 Nights were first devised in Tokyo in February 2003 as events for young designers to meet, network, and show their work in public. They have turned into a massive celebration, with events happening in hundreds of cities around the world, inspiring creatives worldwide. Drawing their name from the Japanese term for the sound of conversation ("chit chat"), it rests on a presentation format that is based on a simple idea: 20 images x 20 seconds. It's a format that makes presentations concise, and keeps things moving at a rapid pace. Following the 20x20 presentations by c4m members, at 4.00pm the Bishop of Barking will bless and pray Henry Shelton's Stations of the Crown of Thorns commission which is now complete and installed at St Paul's Goodmayes. This will be followed by a buffet reception to finish off the event.
Posted by Jonathan Evens at 15:29 2 comments: Links to this post

Elizabeth Duncan Meyer has an exhibition of Garden and Internal Sculptures at the Chelsea Arts Club which will be open from 8th June until 5th July. commission4mission members are invited to the private view on Tuesday 8th June 2010. Drinks from 6.30pm until 9.30pm. Entrance by reply only. RSVP to 0207 386 7871 or email elizabeth.duncanmeyer@yahoo.co.uk.
Posted by Jonathan Evens at 14:28 No comments: Links to this post

Jonathan Evens has a review in the latest issue of Art & Christianity. Although a review of the Resurrection exhibition held by Christian Arts at Bury St Edmonds, the piece also questions, as a stimulus to debate, approaches taken by Christian arts organisations such as Christian Arts and commission4mission to the church-based exhibitions we organise.

The section of the review dealing with these questions and issues is as follows:

"Having recently organised several similar church-based exhibitions of art by artists explicitly viewing themselves and their art as ‘Christian’, the experience of viewing Resurrection also raised a series of issues and questions which are generic to this type of venture.

Here church space was made over into gallery space as the display panels used formed ‘white cubes’. However, if the art were to be integrated into the variety of spaces offered by such a large church would that not enable the art to more readily enhance the ongoing worship life of the church, which otherwise happens around the art instead of with it? Would it not also thereby demonstrate the value of commissioning such works as this generation’s contribution to the ongoing accrual of art which occurs in most churches over the ages?

Such exhibitions highlight the extent to which many artists continue to engage with the Christian faith, its narratives and imagery, and value the opportunities which churches can provide for their work to be seen and appraised by the wider Christian community. Our cathedrals and some central city churches now regularly engage with artists that have national or international reputations both challenging such artists to respond to faith and being challenged by their responses. Parish churches can potentially play a similar role in relation to artists with currently local and/or regional reputations and could do much more to provide both the lifeline of support and encouragement combined with spaces for the practice and exhibition of art in a wide variety of forms.

The exhibitions we organise could also adopt more radical models, perhaps drawing on the experience of the Roman Catholic Church in Poland and it’s engagement with the idea of ‘Sacrum’ in Polish Art during the 1980’s. There, martial law forced virtually the entire artistic community to boycott the official exhibition spaces and the only other places which found approval among independent artistic and intellectual groups were the churches. So, that was where artistic meetings, shows and exhibitions were held with most significant Polish artists and art figures participating in them, and only a very few steering away from addressing religious themes.

Our cultural and political situation is clearly very different but, if we understood consumerism to be the major force of our culture (and one in which the contemporary art establishment is implicated), could exhibitions held in and organised by churches, instead of simply recreating gallery space in church space, not form a more radical alternative to the consumerist practices of the contemporary art establishment by working with artists who themselves challenge consumerism and challenging those, like myself, in Christian arts organisations to do likewise?"
Posted by Jonathan Evens at 16:03 No comments: Links to this post

commission4mission has been awarded funding from London-over-the-Border to publicise the extent to which churches in the Barking Episcopal Area of the Diocese of Chelmsford contain significant art and craft works by creating an Art Trail for the Episcopal Area and documenting this Trail in an Art Trail leaflet.

Examples of art within the Barking Area's churches include work by significant twentieth century artists such as Eric Gill, Hans Feibusch, John Hutton and John Piper, together with contemporary work by the like of Mark Cazalet, Jane Quail and Henry Shelton.

We also intend to apply for the Art Trail to become an Inspire Project, part of the Cultural Olympiad.
Posted by Jonathan Evens at 13:12 No comments: Links to this post 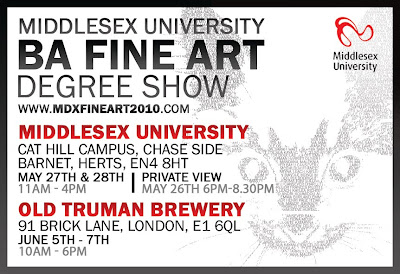 Nadiya Pavliv would like to invite you to come and see what she and her fellow students did at Middlesex University this year. There are two BA Fine Art Degree Shows; one internal at Middlesex in the end of May, where you can see all the work what the students have done and the main show at the Truman Brewery where each student is able to take their best piece. Their website - http://www.mdxfineart2010.com/ - gives further details.
Posted by Jonathan Evens at 08:53 1 comment: Links to this post

Harvey Bradley writes that he and his wife Barbara will be riding a tandem from London to Paris in July for the active and practical 'hope' that Christian Aid offers to communities that are already experiencing the effects of Climate Change.

Hope can sound quite a flimsy thing in response to drought, flooding and other climatic changes - but it can inspire inventiveness and creativity where negativity and despair once reigned. Alastair McIntosh in his very readable book, 'Hell and High Water - Climate Change, Hope and the Human Condition' (2008), comes to this conclusion and shows how hope has worked on the Isle of Eigg to transform a diminishing community to one of growth and community enterprise.

Christian Aid offers schemes in Bangladesh, India, Africa and South America to help farmers change their farming methods to cope with changing climatic conditions. In Zimbabwe, for instance, £55 provides training for a group of five farmers in conservation farming, meaning their families can increase the food they grow by up to 500%! £11 provides drought-resistant seeds for one family which ensures the next harvest provides them with enough food to last through the year.

They aim to raise £3,500 through their 300 mile tandem ride for 'hope'. If you can help, please visit http://www.justgiving.com/HarveyandBarbara-Bradley.
Posted by Jonathan Evens at 08:06 1 comment: Links to this post 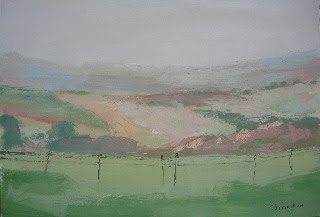 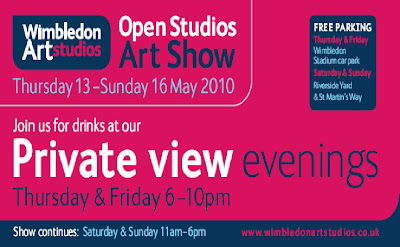 For those that haven't been the show is a really fun experience where you can buy affordable, good quality art directly from the artists. There are over 100 artists, ceramicists and sculptors showing. There is a lovely atmosphere and everyone including children are very welcome.
The show times and dates are:
For directions please go to http://www.wimbledonartstudios.co.uk/.
Posted by Jonathan Evens at 10:37 1 comment: Links to this post