Colours & Stations of the Cross (2) 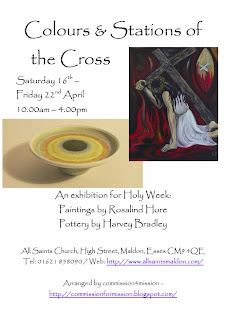 Rosalind Hore is a sculptor and painter of Christian subjects – Christ figures, nativity sets, Ecce Homo, Stations of the Cross etc. She works in clay, plaster, concrete (figures can also be bronze cast at the foundry). Her paintings are mostly in acrylic of the events in the life of Christ. Her work can currently be seen St Edmund Tyseley, St Laurence Upminster, and St Mary Goring-by-Sea. Rosalind seeks to express exaggerated emotion in her work through the use of elongated stylized figures, strong colour and sweeping folds, which exaggerate both movement and emotion. 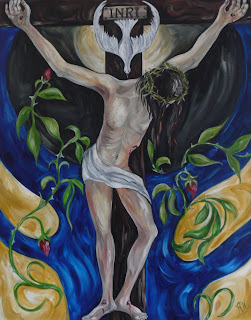 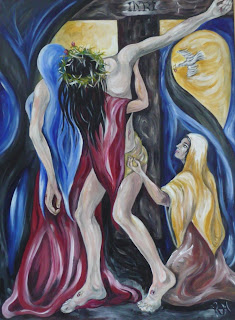 Although not traditionally part of the Stations, the Resurrection of Jesus, as is common nowadays, has been included as a fifteenth station. Each of the Stations in this series are 34 x 42 inches, painted in acrylics, and feature three rose buds as a sign of the Trinity.
Harvey Bradley

Trained as a designer, Harvey Bradley is a long standing and selected member of Anglian Potters – a prestigious association that exhibits members work in such venues as Ely Cathedral, All Saints (Jesus Lane) and Emmanuel College in Cambridge. As well as contributing to these, Harvey has shown work at Chichester Cathedral, Spring Harvest, New Wine and Greenbelt with the Christian arts group Veritasse. 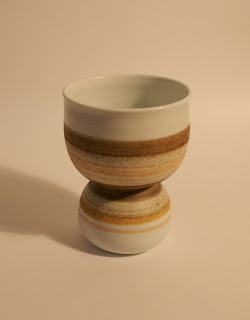 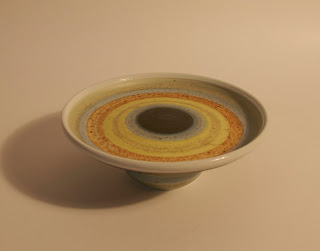 Harvey’s pottery series uses a new sequence for the Stations of the Cross, as follows:

1 Jesus in the Garden of Gethsemane – yellow, blue and green
colours of a hopeful garden overshadowed by a hopeless plan

2 Jesus is betrayed by Judas and arrested – brown, ochre and black
an earthly radical sets in motion loves trusting betrayal

3 Jesus is condemned by the Sanhedrin – stripes of blue, black and orange
religious order and logic threatened by revolutionary notions of Love

6 Jesus is scourged and crowned with thorns – ochre, red and black
earthly vengeance on a passive form

7 Jesus takes up His cross – red, yellow and black
the carpenter lifts His earthly gift and transforms a crooked symbol

8 Jesus is helped by Simon to carry His cross – cream, brown and green
practical love breaks through a tyranny of hopelessness and hate

9 Jesus meets the women of Jerusalem – blue, orange and yellow
even a powerless Creator witnesses to the future promise

11 Jesus promises His kingdom to the repentant thief – yellow, orange and blue
a cosmic reality breaks through the darkest experience of man

12 Jesus entrusts Mary and John to each other – blue, red and yellow
from the dark, gentle caring begins a new weave of sharing

14 Jesus is laid in the tomb – orange, black and yellow
earth’s static time sinks in the spirit of man to prepare for a creative song

15 The resurrection of Jesus – yellow and blue
nature’s spirit re-awakens, bounding to the joy of our Creators call
Posted by Jonathan Evens at 08:50