Art in the Boardroom: Valerie Dean 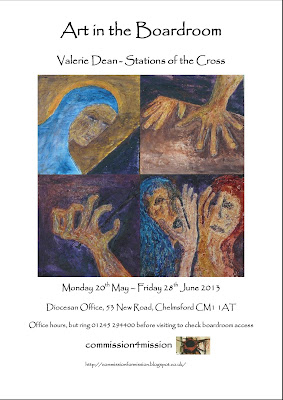 Following exhibitions by The Ven. Martin Webster and Andrea Farmer, the Art in the Boardroom programme at Chelmsford Diocesan Office now features the work of commission4mission artist Valerie Dean.

The set of Stations of the Cross paintings which Valerie is currently showing in the Boardroom at Guy Harlings (Chelmsford Diocesan Office) have a very clear and intense focus on details which are evocative of the whole, as can be seen from the photographs she has taken of the set which can be viewed here. Valerie is keen to discuss ways of making these Stations available for any church that would be interested in having them.


Valerie Dean's Stations of the Cross can be seen in the Boardroom at Guy Harlings (Diocesan Office, 53 New Road, Chelmsford CM1 1AT) from Monday 20th May – Friday 28th June 2013 during office hours. However, because the Boardroom is in regular use it is best to ring 01245 294400 before visiting to check boardroom access.


Guy Harlings is a Grade II listed building, constructed in about 1716-1721 by John Comyns, later a Baron of the Exchequer, and re-fronted at the beginning of the 19th century. Three parts of the building will be open: the front hall, containing 16th century linenfold panelling with a frieze of carved heads, made of timber probably from the Tudor house on this site; the board room; and the resources centre (bookshop). The rooms overlook an expansive lawned garden. The name of the building comes from Guy Harlings who inherited a brewery on the site in 1453. The building has housed the offices of Chelmsford Diocese since 1951.
Posted by Jonathan Evens at 15:58