Drawing into the Forest

"Drawing into the Forest" is a weekend of creative mark-making at Debden House in Epping Forest, Friday 10th September to Sunday 12th September 2010 which will be led by Mark Lewis.

During this intensive and dynamic residential course you will focus on sketchbook technique using rapid mark-making responses to the Forest to capture a 'sense of place'. You will be encouraged to draw with objects and material found in the Forest and many more explorative techniques. There would then be an opportunity for making larger drawings with various dry media indoors, further developed with various collage effects.

Michael Creasey will be exhibiting at the Visual Arts Centre in Frances Bardsley School, Romford as part of the Big Arts Submission Havering (BASH) programme. Michael's exhibition runs from 23 - 27th August beginning with a Launch Night from 7 - 9.00pm on 23rd and continuing from 9.30am - 3.00pm.

Michael is a largely self-taught artist, specializing in portraits and figurative work, mostly nudes. He says, "I am not especially a religious painter, as I mainly paint portraits and figure studies, but I do also paint abstract works which tap into emotional and spiritual aspects of my life and reflect my Christianity."
Posted by Jonathan Evens at 03:31 No comments: 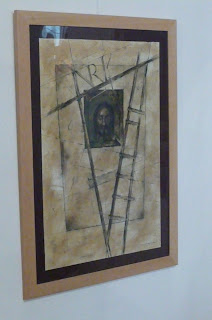 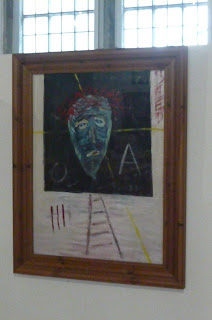 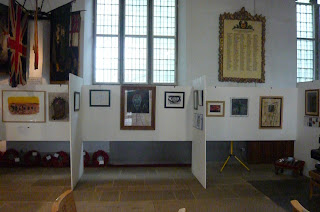 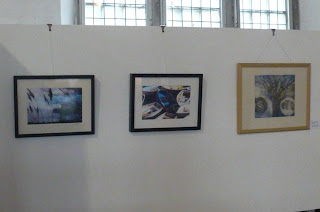 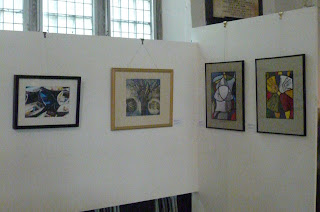 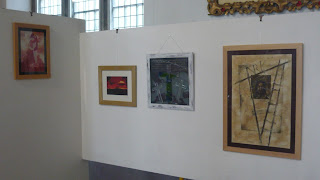 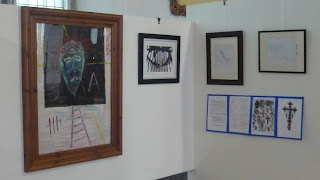 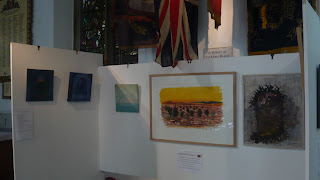 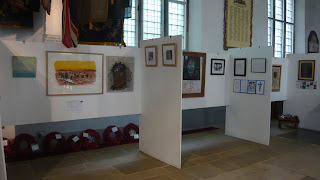 Our ongoing exhibition at All Saints West Ham has been updated this week following sales and artists reclaiming work. The current exhibition features work by Colin Burns, Jonathan Evens, Mark Lewis, Caroline Richardson, Henry Shelton, Sergiy Shkanov and Joy Rousell Stone. The exhibition can be viewed during All Saints' usual opening times which include their regular services and between 9.00am and 3.00pm most Tuesdays. To visit at other times or to confirm opening times, phone the All Saints office on 0208 519 0764.
Posted by Jonathan Evens at 12:41 No comments:

Peacing Together One World exhibition

Our next exhibition will be held at St Mary Magdalen Billericay from 16th - 23rd October. The exhibition is to be entitled Peacing Together One World as it will be held during One World Week. We are also planning to hold a Peacing Together One World performance evening on Friday 22nd October, also at St Mary Magdalen Billericay, featuring commission4mission members and others. More information on this, the exhibition, and other related events will be available nearer the time.
Posted by Jonathan Evens at 09:01 2 comments: 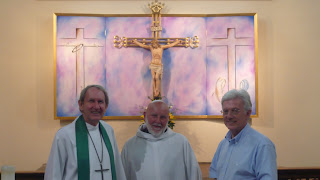 Stations of the Crown of Thorns dedicated

Our second completed commission was dedicated by the Bishop of Barking on 17th July at St Paul’s Goodmayes. The commission, undertaken by Henry Shelton, was for a contemporary set of Stations of the Cross which has become known as the Stations of the Crown of Thorns in that, as part of its semi-abstract imagery, Christ is depicted throughout only by the Crown of Thorns. There are 15 paintings in all, as the scheme includes a resurrection Station depicting Christ present in the Eucharistic elements. A tryptich incorporating Stations XI, XII and XIII forms the central focus of the scheme. This tryptich has inventively incorporated an existing metal crucifix into its design to form Station XII; 'Jesus dies on the cross'. The colour scheme of these 'Stations' harmonizes with the existing stained glass at St Paul’s Goodmayes and the paintings feature the minimal flowing lines that characterise Shelton’s semi-abstract style. Parish Priest, Fr. Ben Rutt-Field wrote an original set of meditations to accompany the Stations and these were prayed by Bishop David as part of the Service of Dedication. A networking afternoon featuring members speaking about their work preceded the Dedication. 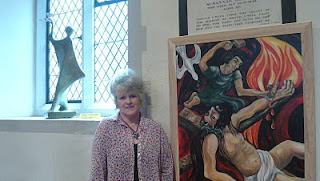 Rosalind Hore and Helen Gould organised a successful Passiontide exhibition held at St Laurence Upminster which featured the work of 15 members. Central to this exhibition was the first showing of a contemporary set of Stations of the Cross by Rosalind Hore. Also on display was work from Rosalind’s series of clay and plaster sculptures. A booklet featuring Rosalind's Stations was produced for the exhibition.

c4m now has an ongoing exhibition space at All Saints West Ham which has been used initially to hang a small group show by a selection of members. This exhibition formed a part of this year’s West Ham Festival at the church. This space enables work by members to be viewed on an ongoing basis and it is hoped that a changing display will include solo and paired exhibitions, in addition to group shows.

At our AGM we agreed a Development Strategy researched and prepared for us by Helen Gould. The strategy was based on a survey of members and an external review and includes: registration as a charity; development of regional cells; creation of an advocacy team; and exploration of opportunities for partnership with similar organisations. This work will be taken forward by a c4m committee comprising: Harvey Bradley; Jonathan Evens; Helen Gould; Mark Lewis; Henry Shelton; and Peter Webb. Our thanks go to former committee members Alexander Chaplin and Steven Saxby who stood down from this role at the AGM.

The Baptism of Jesus, an oil painting by Rosalind Hore is awaiting installation at St Edmund’s Tyseley. Caroline Richardson has designed two windows on the theme of abundant life for St Peter’s Harold Wood while Henry Shelton is designing etched glass windows for All Saints Hutton.

Jewellery maker and conservator Peter Shorer died in June. His life was celebrated at a service held in St John’s Seven Kings. Our webpage includes a tribute to Peter taken from this service. 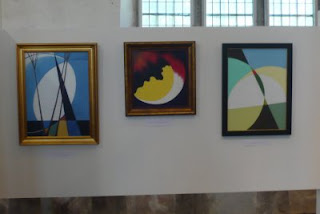 Michael Creasey is a largely self-taught artist, specializing in portraits and figurative work, mostly nudes. He says, "I am not especially a religious painter, as I mainly paint portraits and figure studies, but I do also paint abstract works which tap into emotional and spiritual aspects of my life and reflect my Christianity." Michael will exhibit at the Visual Arts Centre of Francis Bardsley School, Romford, from 23rd to 27th August.

c4m has been successful in gaining funding from London over the Border to develop an Art Trail for the Barking Episcopal Area. Churches have for many years been significant patrons of the visual arts and the Anglican churches in the Barking Area are no exception containing works of art by artists such as Eric Gill, John Hutton and John Piper, among others. Mark Lewis is currently undertaking research for the project and will prepare a leaflet to highlight artists, artworks and churches and to set out the Art Trail created for the Area.
Posted by Jonathan Evens at 07:08 No comments: 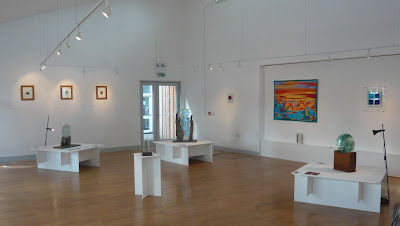 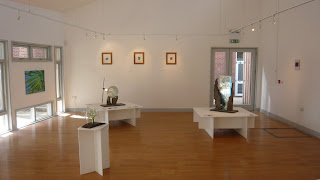 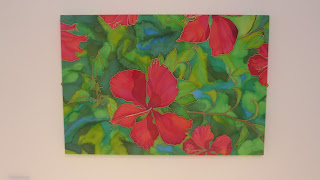 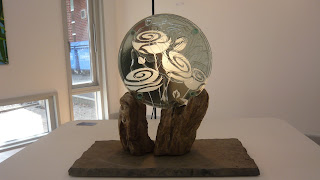 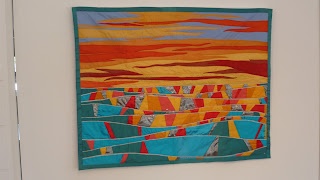 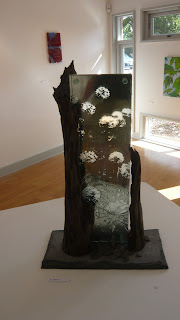 "Glass is a wonderful medium to work with; the unexpected is always just around the corner. Light plays a big part in the design considerations as the glass may look completely different in different lighting or at different times of day. This gives each piece a life of its own, variety unlike any other."

A second commission4mission artist, Michael Creasey, will also be exhibiting at the Visual Arts Centre as part of the Big Arts Submission Havering (BASH) programme. Michael's exhibition runs from 23 - 27th August beginning with a Launch Night from 7 - 9.00pm on 23rd and continuing from 9.30am - 3.00pm.
Posted by Jonathan Evens at 10:09 No comments: