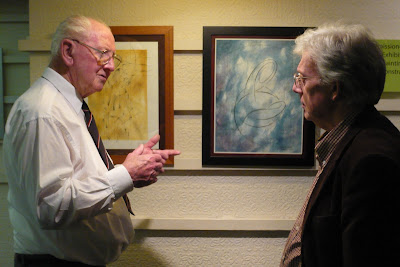 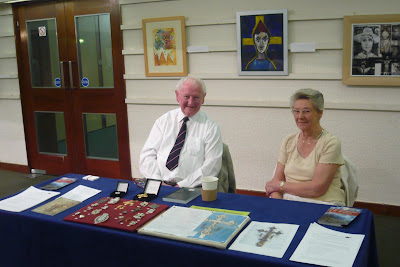 Peter Shorer was born in Hackney in 1923. His family moved to the new Newbury Park estate when he was quite small. While he was at Downshall Junior School he had rheumatic fever twice which interrupted his education but didn’t stop him learning, as his parents gave him the complete Children’s Encyclopaedia. He read this from cover to cover and it planted the seed of knowledge of history in his mind.

He left school at 14 and went to train at the Central School of Arts & Crafts, following three generations of jewellers & goldsmiths in his family. Whilst there he was ‘head hunted’ by the British Museum to work with antiquities. Not long after, when war seemed imminent, he helped to pack up precious antiquities such as the Sutton Hoo treasure and priceless porcelain to be stored in various secret places in the country for safety.

At the beginning of the war he joined the Home Guard and enjoyed romping about in Hainault Forest. At 17 he volunteered for the Navy but because of a slight heart defect he was turned down. However, at 18 he got his call up papers and somehow convinced the doctor he was fit as long as he could go into the navy. After the usual training on the ‘HMS Ganges’ he spent his time on Motor Torpedo boats mostly in the Mediterranean. This started his love of the sea and boats of any kind. His war was at times exhilarating, frightening, funny or sad but the comradeship of his shipmates held them together, as is still the case in the Coastal Forces Veterans Association.

At the end of the war he came home to resume his job at the British Museum. One of his first jobs was to unpack the antiquities which he had packed 6 years before and to put them back on exhibition. He acquired a motor bike to travel to work and this started his second love of motor cycling joining the Ilford Light Car & Motorcycle Club.

He met Audrey at the Bury Club dance and she fell in love, first with his motor bike and then with Peter. They married in 1951 and went on honeymoon to Cornwall on the motorbike. The honeymoon was paid for from the work Peter had been commissioned to do for the Festival of Britain Exhibition. They later travelled all over Europe on the bike, when one was limited to taking £25 out of the country.

When they had saved enough money they moved to Wickford. Audrey was very pleased when Peter built a conservatory onto the back of their bungalow only to discover that its main purpose was so that he could build a sailing dinghy in it. When they weren’t sailing the dinghy at Burnham on Crouch, they were crewing a Ketch across the North Sea.

When their children Michael & Katherine were born, Peter & Audrey moved back to Newbury Park. So that the whole family could join in his adventures, he converted a Volkswagen camper van with sleeping & cooking facilities and school holidays were then spent touring France & Spain staying at camp sites or just on the top of a mountain.

As sailing was not practical with small children, Peter bought the hull of a narrow boat and brought it to Stratford, mooring it near the old glue factory where he converted it to a four berth canal boat. And so started his third love, of cruising the beautiful English countryside canals in his boat ‘Compass Light’. Michael & Katherine learned to steer the boat and work the locks like professionals. That pleasure has continued with Katherine, and her husband Mark, having their own narrow boat.

Peter’s work at the British Museum as a conservation officer enabled him to handle many treasures in the Romano/British and Mediaeval departments He was always full of admiration for the intricate work of the early Celtic & Roman craftsmen and would argue the point when anyone called them primitive. He often went on excavations conserving artefacts on site and later preparing them for exhibition. During his time at the museum he helped and advised many students who were studying archaeology and was pleased to see them climb the ladder of success in the museum world.

As part of his work he was often asked to make exact reproductions of antiquities for other museums. This gave birth to his private business (Historic Jewellery Reproduction) when he retired, of supplying museum shops with perfect reproductions of jewellery from all periods of history so completing the circle of the generations of jewellers. One which his son, Michael Shorer, continues today.
Michael recollects that:
"Dad was a great craftsman ... There seemed to be nothing that he couldn't make. Design problems were mere pebbles to be kicked aside en route to where he wanted to be. He started teaching me how to make jewellery when I was about 11 and always told me that if a problem seemed insurmountable, turn the whole thing upside down to get a different perspective. Hey presto, it works! He used this 'mantra' at the British Museum to great effect. As well as the incredible metalwork and ceramics he restored, was the solution to lifting an entire collapsed Roman wall plaster. He bonded the back of it to the same honeycomb structure that is used in the wings of Harrier jump jets. A few marine shackles, cables and levers later and it was upright. In fact, we have heard that when the keepers of departments came up against a seemingly impossible restoration, inevitably the phone would ring in Dad's workshop - "Shorer, could you spare a minute?"
Peter was interested in local issues and would often reel off a letter or e-mail in protest at an injustice or a lowering of standards. He was known locally as the guy who always put the flag out on St George’s day and Armistice day. He continued to keep in touch with his ex students in their diverse occupations and loved to reminisce about ‘the old days’.

I first met Peter properly when he made a brass plaque for our votive candle stand here at St John’s. Having found out about his skill as a craftsman, I told him about commission4mission. Peter joined and exhibited his jewellery at commission4mission events in St Alban’s Romford, St Laurence’s Upminster, and Methodist Central Hall Westminster. Then, when I was invited to chair the Seven Kings & Newbury Park Resident’s Association, I spent a number of meetings discussing local issues with Peter, who was Vice Chair of the Association.

My sense in all these contexts was that Peter was a gentleman. I mean that in both senses of the word; as a man who was gentle with others and as someone with the standards and courtesies of a gentleman. Peter’s detailed interest in issues, objects and people meant that he wanted to understand each fully and sought to treat all alike with real concern and attention.
Posted by Jonathan Evens at 00:22