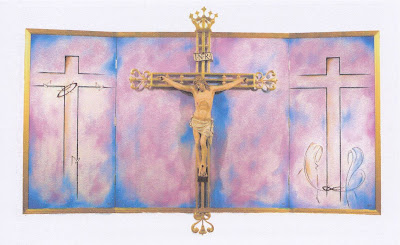 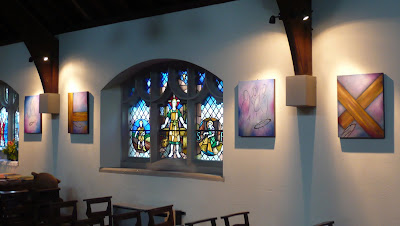 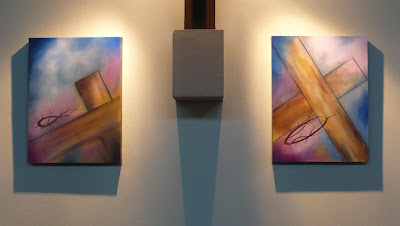 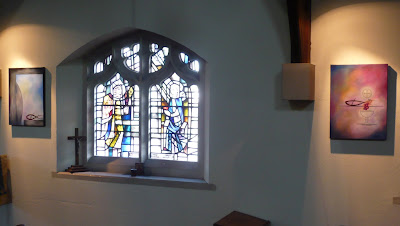 The Stations of the Crown of Thorns, a series of 'Stations of the Cross' created by Henry Shelton for St Paul's Goodmayes as a commission gained through commission4mission, are to be blessed and dedicated by the Bishop of Barking on Saturday 17th July at 4.00pm.

The tryptich, which forms the centrepiece of the Stations of the Crown of Thorns, includes Stations 11, 12 and 13 and has inventively incorporated an existing metal crucifix into its design to form the 12th Station; 'Jesus dies on the cross'. There are 15 'Stations' as the scheme includes a resurrection 'Station' depicting Christ present in the Eucharistic elements.

The scheme as a whole is unusual in that, as part of its semi-abstract imagery, Christ is depicted throughout only by the Crown of Thorns. Shelton's trademark flowing lines, which create images through minimal means and with maximum facility, are in evidence throughout the scheme. However, as an artist who often paints with the tones and harmonies of the Dutch Masters, this commission represents a considerable lightening of his palette in order that the colour scheme of these 'Stations' harmonizes with the existing stained glass.

Shelton's 'Stations' complement other existing work at St Pauls Goodmayes, including stained glass by Sir Edward Burne-Jones, William Morris, and Leonard Evetts plus a Madonna and Child by Jane Quail, to create a feast of visual art for worshipper and visitor alike. Parish priest, Fr. Benjamin Rutt-Field, has written a set of meditations in order to pray the new 'Stations'.

Preceding the dedication of the 'Stations' will be a commission4mission networking event also at St Paul's Goodmayes beginning at 2.00pm on Saturday 17th July.

This will be a 20x20 networking event where commission4mission members will be giving presentations of their work (or an aspect of it). The presentation format is contained in the name, as each presentation will involve showing 20 images at 20 second intervals. Each member therefore has a seven minute slot in which to make their presentation.

PechaKucha 20x20 Nights were first devised in Tokyo in February 2003 as events for young designers to meet, network, and show their work in public. They have turned into a massive celebration, with events happening in hundreds of cities around the world, inspiring creatives worldwide. Drawing their name from the Japanese term for the sound of conversation ("chit chat"), it rests on a presentation format that is based on a simple idea: 20 images x 20 seconds. It's a format that makes presentations concise, and keeps things moving at a rapid pace.

All are welcome to both the networking event and the dedication of the 'Stations'.
Posted by Jonathan Evens at 03:23