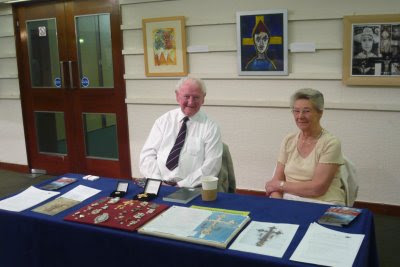 Peter Shorer with his wife Audrey during commission4mission's Pentecost Festival exhibition in 2009. 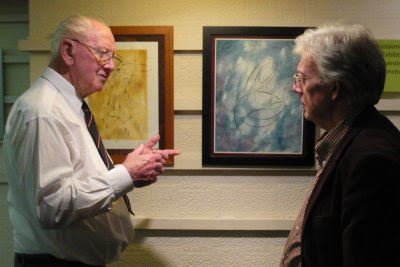 Peter Shorer and Henry Shelton at the Pentecost Festival exhibition
It is with real regret and shock that we inform you of the recent death of commission4mission member, Peter Shorer. Our condolences and prayers go to Peter's family, in particular his wife Audrey.
Peter was one of the early members of commission4mission showing his work at our launch event, our first exhibition (Pentecost Festival 2009), and more recently at St Laurence Upminster.
Peter followed in the footsteps of his grandfather, who made the metalwork into which gems were set, and his father, who was a setter of gems in gold, silver and platinum metalwork including re-setting gems in the Coronation Crown, by studying jewellery design and manufacture at Central St Martin's. He then joined the staff of the British Museum where he worked on the Sutton Hoo and Mildenhall treasures. While with the British Museum he developed a technique for creating accurate reproductions of antiques using moulds. His work in this field has resulted in commissions from museums around the world and the establishment of his own business, Historic Jewellery Reproduction, making costume jewellery reproduced from genuine antiquities.
Peter, with his unprecedented experience of many years working with antiquities at the British Museum and countless other museums throughout the world, was one of the select few antiquarians allowed to handle and take moulds from rare and priceless artifacts. His amazing reproductions have been acclaimed for many years as stimulating and exciting aids to the world’s history lessons and lectures as well as being a necessary part of historic cinema and televisual productions.
Posted by Jonathan Evens at 17:27