'The Month' features our launch 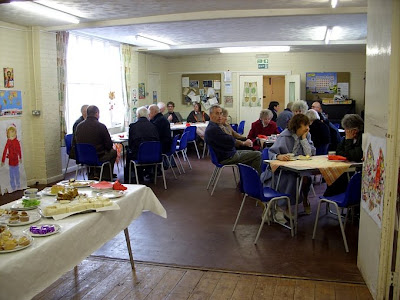 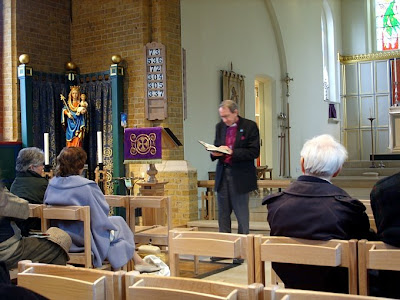 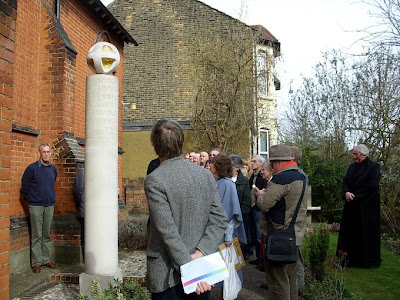 Outside St Albans on the Art Tour 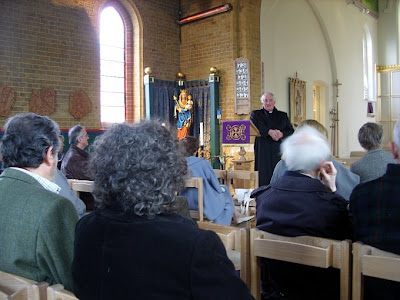 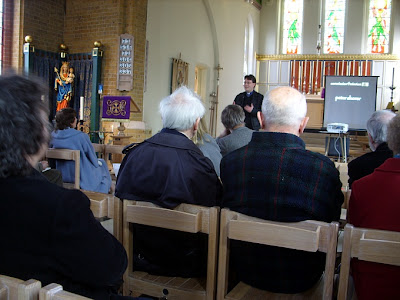 Revd. Jonathan Evens
The centre pages of the current edition of 'The Month', the newspaper for the Diocese of Chelmsford, features a story about the recent launch of Commission For Mission.
commission4mission enjoyed a successful launch at St Alban's Romford. Fr. Roderick Hingley, St Alban's Parish Priest, gave a tour of the artworks commissioned for the church and described how the series of commissions had helped to transform the church in terms of light, space and welcome. He spoke about the way in which commissioning contemporary artists had meant that the artworks had relevance and resonance for local people, most obviously in the Mark Cazalet cancel ceiling mural with its imagery drawn from rural and urban Havering. What the achievement at St Alban's demonstrates is not only that the commissioning of contemporary Christian Art by Parish Churches is possible but that sensitive, informed and brave commissioning enhances the mission of the church as well as its aesthetic.
Jonathan Evens gave a brief presentation of the aim and objectives of commission4mission which also set out our initial programme:
• exhibitions at Pentecost Festival (30th May) & Chelmsford Cathedral (2nd-7th November);• study day at Chelmsford Cathedral (7th November);
• exploration of four possible commissions with two proposals submitted;
• co-operation with the Faith & Image group;
• application submitted for catalogue funding;
• art workshop at ‘Fun in the Park’ in Barkingside (13 June);
• invitation to be part of London-wide discussions on art in religious spaces;
• invitation to exhibit in the West Ham Festival; and
• support from Bishop of Barking for commission4mission leaflets.
Finally, Bishop David gave the keynote address as Patron of commission4mission. He began by speaking about creativity as both God-given and a key aspect of what it means to be human. He described the birth and growth of a child into adulthood as the most astonishing kinetic sculpture. He outlined how he saw spirituality breaking through in much contemporary and modern art and called for Christians to be sensitive interpreters of such art. Among the examples he cited were the humanity of Anthony Gormley's work based as it is on his own body and the 'something more' of Damien Hirst's diamond encrusted skull, For The Love Of God. He ended by using a quote attributed to Rowan Williams “that artists are special people but every person is a special kind of artist.” commission4mission would need, he suggested, to be a support the special people that artists are in their creativity but also to find ways of revealing and developing the creativity of all.
Among those present at the launch were representatives of the Arts Centre Group, Faith & Image and artlove.com.
Photos from the launch can be found by clicking here and here.
Posted by Jonathan Evens at 06:58