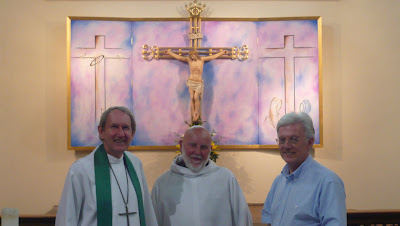 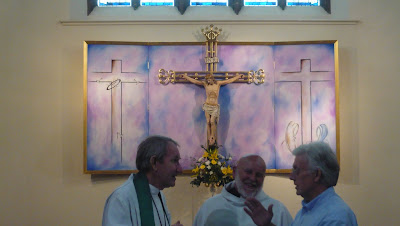 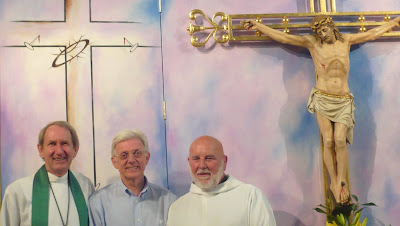 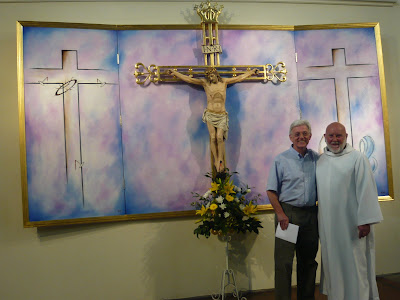 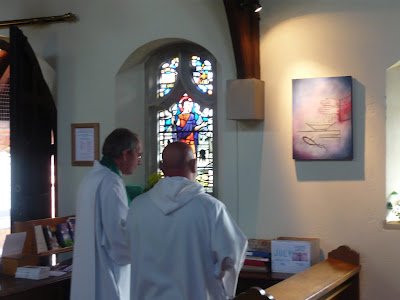 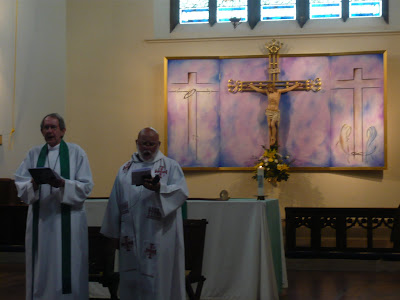 “For Christian art to have any significance and empathy it must be Spirit-driven, Spirit-imprinted. It should stimulate both our imaginations and our prayers.”

Such is the belief of Fr Benjamin Rutt-Field, Parish Priest of St Paul’s Goodmayes, who has both commissioned a new set of Stations of the Cross from noted religious artist, Henry Shelton, and written an original set of meditations to accompany the paintings.

The seed was sown by an elderly parishioner who gifted a generous sum for a new set of Stations and whose memory lives on in the dedication of the tryptich, incorporating Stations XI, XII and XIII, which, as altarpiece, forms the central focus of the scheme. This tryptich has inventively incorporated an existing metal crucifix into its design to form Station XII; 'Jesus dies on the cross'. There are 15 paintings in all, as the scheme includes a resurrection 'Station' depicting Christ present in the Eucharistic elements.

These, though, are not the only unusual elements of these Stations, in that, as part of its semi-abstract imagery, Christ is depicted throughout only by the Crown of Thorns. Fr. Rutt-Field notes that, “these Stations are known as the ‘Crown of Thorns’, rather than ‘The Cross’, because Jesus is depicted in each one as a simple, humble crown of thorns.”

Shelton says of his semi-abstract style and minimal flowing lines, that, “as I’ve got older I’ve learnt that ‘less is more’ and through the development of my work I’ve learnt to express emotion in a semi-abstract form.” This is why he paints; “it all goes back to feeling; the pathos of suffering.”

The power of art to evoke emotion is what originally inspired Shelton and which has sustained his work throughout his career:

“When I first saw the great Rembrandt’s in the Rijksmuseum in Amsterdam, the power of his images seemed to transcend time. The same thing attracted me to Christian Art as a choirboy at All Saints West Ham; the art spoke to me. I used to look at the altar and see images that were just so powerful. The images seemed to bring the past into the present and to form a profound link with the lineage of the past. I see myself as an artist trying in my small way to continue that lineage and my passion as a Christian artist is to keep that lineage alive in my generation as a witness.”

However, as an artist who often paints with the tones and harmonies of the Dutch Masters, this commission represents a considerable lightening of Shelton’s palette in order that the colour scheme of these 'Stations' harmonizes with the existing stained glass. At St Paul’s Goodmayes, Shelton's 'Stations' complement existing work, including stained glass by Sir Edward Burne-Jones, William Morris, and Leonard Evetts together with a Madonna and Child by Jane Quail, to create a feast of visual art for worshipper and visitor alike.

The commission is only the second to be completed by commission4mission, of which Shelton is both a founder member and the current Chairman. Shelton says, of commission4mission, “I want us to be offering quality work and craftsmanship, rather than mass-produced work, to continue the legacy of the Church as a great commissioner of art. The Church has, in fact, commissioned some of the greatest works of art ever produced.”

To have his work in churches, Shelton says, “really is the fulfilment of my life’s work.” He doesn’t have much ambition to show in galleries and says that, “the whole point for me is to create reaction and engage people; for people to enjoy and be moved by my work, just as I’ve been engaged by the work of other artists.”

His most recent pictures have all come to him in prayer as he has been meditating on particular Bible passages. Most of his work now comes through a meditational process and it is, perhaps, this quality of Shelton’s work to which Fr. Rutt-Field is responding when he says:

“I firmly believe that these new Stations of the Crown of Thorns, painted by a deeply committed Christian artist, are indeed both Spirit-driven and Spirit imprinted. They will greatly enhance and beautify the simple form and architectural lines of our parish church, as well as our worship.”

The Stations of the Crown of Thorns were dedicated by the Bishop of Barking today following a commission4mission networking afternoon which included presentations on their work by Bishop David, Michael Creasey, Caroline Richardson, Henry Shelton, and Joy Rousell Stone together with a update on the Barking Art Trail project by Mark Lewis.
Posted by Jonathan Evens at 10:30