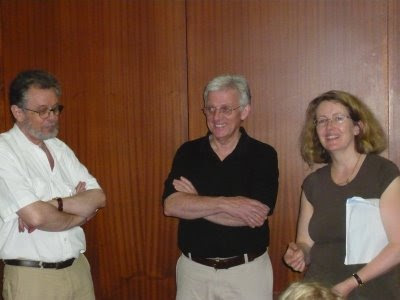 Helen Gould will begin working on events and strategic development for commission4mission this month.

Helen is currently an ordinand at the North Thames Ministerial Training Course and will be ordained as a Deacon in June. We have gained funding from London over the Border to enable us to employ Helen on a part-time basis from February - April and then, once in her curacy, she will continue to be able to give time to work for commission4mission.

Before beginning ordination training, Helen was Director of Creative Exchange, a charity which for ten years researched and advocated for the role of culture in development. The organisation built up an international network and completed projects exploring the role of culture in international development, HIV/AIDS, conflict and in the inclusion and integration of refugees and asylum seekers.

Creative Exchange was launched in 1998, following a meeting of artists, development practitioners and policymakers in London in May 1997 which called for the establishment of a network to share information about the role played by arts activities in international development and social policy.

It gained charitable status in 2000. Its charitable mandate – to advance public education about ways in which arts and culture help poor and disadvantaged people improve their quality of life – was specially devised by the Charity Commission since no other charity had previously served to promote the social role of the arts.

Creative Exchange activities helped people connect and share ideas and skills, learn about the use of culture and arts in social settings, and change and influence policy and practice. Creative Exchange worked with local practitioners and grassroots organisations, listening to their knowledge and wisdom of how culture works and influences in people and communities. This work opened up new avenues for enquiry on the ‘Affective’ nature of arts and culture – the way culture engages with our emotional make-up and enables us to engage, participate and learn.

Since becoming an ordinand, Helen has been the Development Worker at St Andrew's Leytonstone where she has been involved in setting up Café Refresh and its Reflect Arts programme. Helen organised the commission4mission exhibition and artist's networking evening held at St Andrew's in 2009 and the Tree of Life Arts programme to which several commission4mission artists contributed.