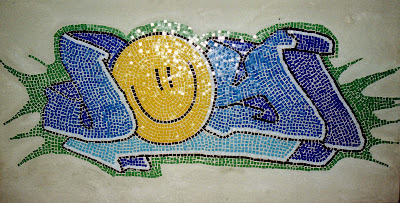 JOY (160cm x 80cm):
Philippians 4:4
Rejoice in the Lord always. I will say it again: Rejoice! Let your gentleness be evident to all. The Lord is near. Do not be anxious about anything, but in everything, by prayer and petition, with thanksgiving, present your request to God. And the peace of God which transcends all understanding, will guard your hearts and your minds i Christ Jesus? 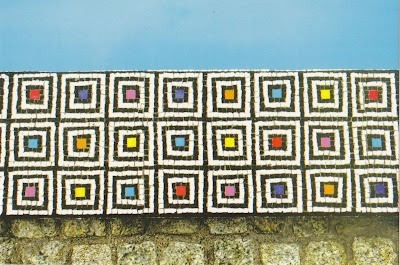 Viki Isherwood-Metzler learnt the art of mosaic in Ravenna, Italy and worked until 2001 as a mosaic maker in Zurich, Switzerland from where she comes. Since 2002 she has lived and worked in London.

Viki's Mosaics does all kind of commissioned mosaic work in marble, glass, ceramics, terracotta and pebble stones. She writes that:

"Mosaics are used on all kinds of surfaces. They are a beautiful way to decorate and protect facades, floors, walls, ceilings and swimming pools. They are equally appropriate indoors and outdoors. Some types of furniture covered in mosaic look great too."

To see a good range of Viki's work click on the link here to view images on her website.
Posted by Jonathan Evens at 14:41