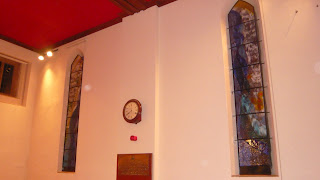 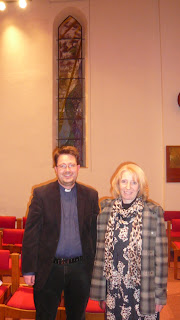 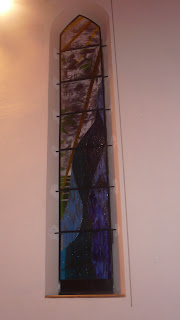 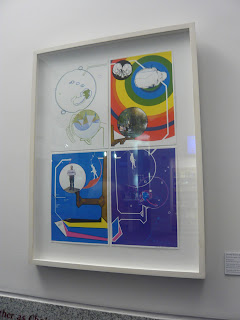 The second dedication in a week of a completed commission4mission commission took place this evening at St Peter's Harold Wood when two fused glass windows created by Caroline Richardson were dedicated by the Bishop of Chelmsford, the Rt. Revd. Stephen Cottrell.

Caroline has created a flowing complementary design focussing on light and water for the two windows in the north transept of the church which incorporates in one the text of John 8. 12 and in the other of John 10. 10. In both, the design has darker colours at the base grading upwards to lighter and finally plain glass at the apex. As the photos above were taken after the Evening Service, they do not show the colour of the windows to their best effect.

The windows were created using glass panels which were cut to pattern and fired in a kiln in order to fuse the glass before being placed into stainless steel frame designed to fit into the window arches thereby sitting in front of the existing glass.

The north transept is opposite what is now the main entrance to the church following an extensive building project on the south side of the church. The windows and their texts are intended as vibrant and welcoming visual statements of faith for all who enter the church and this element of the commission was used by Bishop Stephen in his prayer of dedication.

An earlier commission by David Henningham of the Henningham Family Press - a set of four linked screenprints - can also be found at St Peter's Harold Wood in the newly built Hub which is now the entrance to the church, its facilities and services. It is of real encouragement to see a church integrating artistic commissions into what has been an ambitious and stretching redevelopment.
Posted by Jonathan Evens at 15:07