Launch of the Art Trail for the Barking Episcopal Area (3) 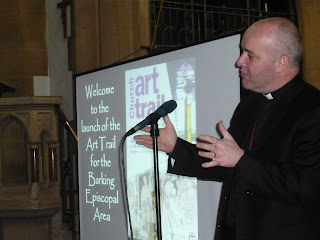 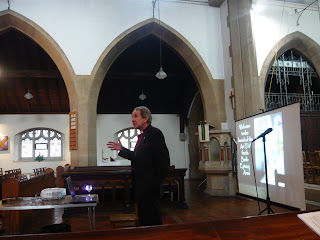 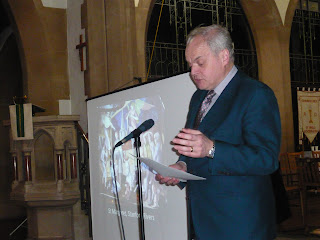 A new Art Trail created for the Barking Episcopal Area by commission4mission with funding from London-over-the-Border was jointly launched by the Bishops of Chelmsford and Barking at St Paul’s Goodmayes on Thursday 17th February 2011.
The aim of the Art Trail is to raise awareness of the rich and diverse range of modern and contemporary arts and crafts from the last 100 years which can be found within the 36 featured churches. The significant works of art in these churches, taken collectively, represent a major contribution to the legacy of the church as an important commissioner of art.

The Rt. Revd. David Hawkins, Bishop of Barking, has said: “For centuries the Arts have been an important medium through which public communication of the faith has taken place and the Church has had a lengthy and happy marriage with the Arts.” The Art Trail demonstrates that this long relationship between the Church and the Arts continues today, as the Trail includes work by significant twentieth century artists such as Eric Gill, Hans Feibusch, John Hutton and John Piper together with contemporary work by the like of Mark Cazalet, Jane Quail and Henry Shelton.

At the launch of the Art Trail, The Rt. Revd. Stephen Cottrell, Bishop of Chelmsford, described and interpreted a painting by Stanley Spencer, from his Christ in the Wilderness series, entitled The Scorpion, before concluding:

“I do not know what other art form could convey and hold the possibility of converging in so many layers. Not just do the visual arts comment on biblical narrative, but they illuminate it in a way that written or spoken forms cannot, being linear forms. Art opens windows on a set of concepts and ideas and brings them together. These windows offer a fresh perspective onto the faith we share, that other forms simply cannot.”

The Bishop of Barking stated that:

God knew that: for centuries he relied on the words of the prophets and then he realized that he needed to send his Son to communicate in ways that words could not, the breadth, depth and height of his love. The word became flesh: the most beautiful living sculpture ever created – Jesus Christ.”

The Art Trail is being publicised through a leaflet which provides information about the featured artists and churches and includes a map showing the churches featured on the Trail together with contact details, so that visits to one or more churches can be planned in advance. Fine Arts lecturer, artist and commission4mission member, Mark Lewis, researched and developed the leaflet documenting the Art Trail and introduced those present at the launch to some of the highlights of the Trail and the rationale behind it.

Mark Lewis said that his brief had been to research commissioned art and craft in the Episcopal Area from the past 100 years. While stained glass is the dominant Ecclesiastical art form, he had been concerned show a diversity and variety of media and styles within the selections made. He highlighted works such as the significant mosaic by John Piper at St Paul’s Harlow and the striking ‘Spencer-esque’ mural by Fyffe Christie at St Margaret’s Standford Rivers. Churches with particularly fine collections of artworks included: St Albans, Romford; St Andrew’s Leytonstone; St Barnabas Walthamstow; St Margaret’s Barking; St Mary’s South Woodford; and, the church chosen as the location for the launch event, St Paul’s Goodmayes.
Posted by Jonathan Evens at 01:41