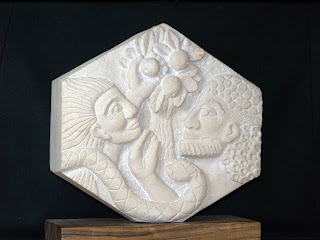 Clorinda Goodman's Eden (Ancilla Domini) was recently exhibited in London Pride, a four day festival and exhibition held in the London Borough of Redbridge celebrating art & design in London over the last six decades, as part of the visit by HM Queen and HRH The Duke of Edinburgh to the borough. Major galleries, museums, colleges and universities exhibited works of art and iconic design during this unique event, including the Tate and Saatchi galleries.

Here is an article Clorinda has written based on the incident depicted in this work:

The stone carving I made of , or rather, of a crucial event that took place there, was completed in Spring 2010. At first the name seemed so obvious that I did not give it a second thought. It shows the moment that Eve picked the fruit from the Tree of Knowledge. And instead of rebuking her for disobedience, Adam is holding up his hand for a piece of it to taste. Somehow, one feels instinctively that this would have been more likely. After all they thought they were alone in the garden, and nobody could see, or would know.

My initial view of the matter was that it had been very unfair of Adam to blame Eve later, when the Lord God found out what they had done. So my carving was intended as a slightly feminist critique of Adam’s behaviour. As usual, the woman gets the blame for the man’s problems. I only vaguely recalled some words from Genesis: ‘The woman whom thou gavest to be with me, she gave me of the tree and I did eat’ (ch.3.v.12). When challenged by God, Eve’s excuse is ‘The serpent beguiled me, and I did eat’. So the question arose as to whether Eve knew of the ban on eating from this particular tree? That was not something that sprang readily to mind.

After a sermon on Genesis, I finally had to examine my bible and look more closely at the sequence of events. Was Eve present when God told Adam, or did Adam pass the message on later? So was Eve truly an innocent party? The place where God forbids Adam to eat fruit from the Tree of Knowledge is in chapter 2.vv.16 and 17. But it is only in the following verse, v.18, that God decides that Adam needs a companion in the garden, and in v.21 creates her from a rib taken from Adam’s side as he lies in a deep sleep. Clearly Eve did not even exist at the time of this prohibition.

Looking back at the confession to the Lord God, Eve blamed the serpent. So I went further back to ch.3.v.1 which describes the serpent as ‘more subtil’ than any beast the field, and recounts its conversation with Eve. When the serpent encourages her to eat, she explains that it is forbidden by the Lord God (v.3). So this lets poor old Adam off the hook! Before she picked the fruit, Eve knew indeed that it was forbidden.

Adam and Eve both experience a sudden unexpected consequence of their actions in ch.3.v.7 ‘And the eyes of them both were opened, and they knew that they were naked; and they sewed fig leaves together and made themselves aprons’. The meeting with God follows immediately, when he punishes them by condemning the woman to the pains of childbirth and Adam to a life of hard labour. The serpent simply receives a general curse.

So what is this chapter telling us? What underlying or symbolic meaning can we extract from it? Why did they become ashamed of being naked and sew themselves aprons - as opposed to a coat or any other garment? The most obvious answer is that this is about the awakening of shame, self consciousness and sexual maturity. Or perhaps, in Freudian terms, it portrays the journey from id to ego and super ego.

Although earlier (ch.1.v.27) Genesis told us that God had created man in his own image, ‘male and female created he them’, v.28 finds God commanding them to ‘Be fruitful and multiply, and replenish the earth and subdue it and have dominion over …the fish, the fowl and every living thing’. This is well before God decided to create a companion for Adam in the garden in ch.2.v.18.

So the writer of Genesis perceived a conundrum. How could Adam and Eve be fruitful and multiply without the means to do so? Remaining in a state of blissful innocence simply would not do. Even when Adam welcomes Eve as his companion at the end of ch.2, and says she is ‘flesh of his flesh’, and that man shall leave his parents and cleave to his wife and become one flesh with her, v.25 reminds us that they were still naked and not ashamed. So they lacked self consciousness, and sexual desire until the serpent intervenes – as perhaps another powerful sexual symbol. If the serpent had not beguiled her, Eve would not have eaten the fruit, whether it was an apple or a pomegranate as some think. Had she not offered it to Adam, they would have remained in that delightful, carefree state of innocence that we see in small children.  So although it was disobedience, both the serpent and Eve were enabling God’s commandment to be fruitful to be fulfilled, but in a slightly different way than any of them appreciated.

We are used to seeing the Virgin Mary referred to as ‘Ancilla Domini’, the handmaid of the Lord, at the Annunciation, when she agrees to bear the Son of God to be the Redeemer of the World. Perhaps it is time to reconsider Eve’s role, for without her curiosity, willingness to listen to persuasive argument and disobedience, human beings would have remained trapped in a sterile . Was Eve indeed the first Ancilla Domini? There is less to condemn in Adam, and more to thank Eve for than I first thought. So what about the role of the serpent? And finally, should I re-name my carving in Eve’s honour?
Posted by Jonathan Evens at 04:49