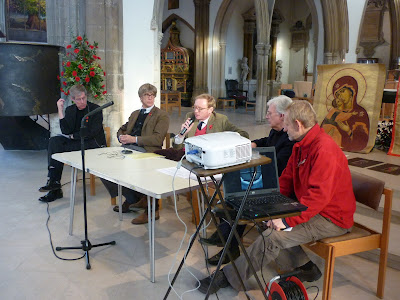 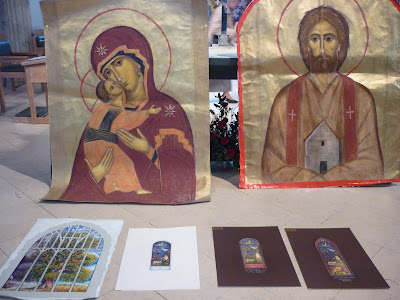 Cartoons of works commissioned by Peter Judd
The Very Revd. Peter Judd, Dean of Chelmsford Cathedral, spoke at commission4mission's recent Study Day from the perspective of those commissioning contemporary art for churches:
While at Iffley Church Oxford, we were undertaking some modest reordering when the Chair of the Diocesan Advisory Committee asked whether we would like a John Piper Nativity window at the church. The already completed window was a Tree of Life with animals and the key question was how to fit it into the church.
This situation is described in a recent biography of John and Myfanwy Piper, although my recollection of events differs in some details. The family were insistent that Piper's Nativity went into the East window of the church where there was already an existing window by C. Webb. The C. Webb Society wished to retain the East Window and the issue became so divisive that I decided to refuse the offer.
However, Myfanwy Piper was then persuaded that a better position for the window would be on the south side of the baptistry. In this setting the window needed an extension and none of those proposed were acceptable to Myfanwy. Eventually I sat down with my daughter and worked on an alternative which was acceptable.
Eventually, although the parish had had a petition to stop the window, it all went through and everyone loved it. There was no cost for the window as it had been a gift.
At Chelmsford I thought that the Cathedral needed a symbol that would welcome visitors to the Cathedral and had admired Peter Eugene Ball's Christus at Southwell Minster. A congregation member liked Ball's work and became the benefactor for the project. I visited Ball initially and he then visited the Cathedral. We looked at the space and I then suggested leaving him to spend longer looking on his own but he said, "I know what I'm going to do. I'm not a prima donna."
Ball produced a small model which people grew to like but the final piece caused consternation when it was delivered as it appeared huge. People were saying that it was grotesquely out of scale but Ball simply said, "Trust me," and once in place it isn't out of scale at all.
A Mother and Child by Ball followed and most recently a set of candlesticks, as I thought it important to have some continuity in commissions. We also have a Nativity set by Ball which was paid for by the Friends of the Cathedral. Not everyone liked the humourous nature of the set but were won over when they saw the way in which children responded to the set.
The next project was a blank window revealed after the transfer of the organ. I had been impressed by the doors to the organ by Patrick Caulfield in Portsmouth Cathedral but was cautioned that, while a nice man, I would be lucky to find him sober. I went to see him and was immediately asked if I would like a glass of wine. Caulfield didn't want to get involved so I asked Tom Devonshire Jones for advice. He suggested Mark Cazalet and we met in the Cathedral. Cazalet had been looking at the space before we met and I quickly discovered that we were both thinking along the same lines (a Tree of Life); a scary but thrilling meeting of minds.
Cazalet produced a cartoon for our consideration and the finished work was almost exactly the same. The work was funding through a Millennium Grant for the local council. It was painted on panels in a disused church. Halfway through the painting was almost entirely covered in gold leaf and the green of the tree was then painted on top of the gold leaf. Children visiting the Cathedral regularly explain to their parents that the painting is all about the environment.
I had received a gift of £2,000 to replace the original altar frontal in the Mildmay Chapel and had been sent a catalogue from the tapestry department of West Dean College Chichester. There was a particular design that I liked so I got in touch and visited. I once taken aback by the estimated costs because of the large number of hours involved in weaving. However, it got done to budget and the original vibrant design that I liked, following research at Bradwell, became a very serene design.
The last project to speak about involves a series of icons for four blank windows in the Cathedral chancel. Initially, I was thinking of paintings linked to the Tree of Life but decided not to pursue this idea and instead thought of four icons related to the Cathedral - St Mary the Virgin, Christ, St Peter and St Cedd.
I met with a leading iconographer but for reasons of cost was unable to pursue this option. Then three nuns from the Community of St John the Baptist at Tolleshunt Knights attended Evensong at the Cathedral and showed interest when they were told about the project. Their designs were produced very quickly and cartoons put in place by Sister Maria using a cherrypicker brought in for the Cathedral Mystery Play. The only real change has been that I have asked them to roughen up St Cedd abit in order that he has a wildness like that of John the Baptist. They will be installed in January with the final paint then taking two further weeks. The significant difference in costs between the original quote and that of the nuns which has made this an affordable project.
Some commissions have been so easy and some so difficult. Once an artist has been engaged those commissioning the work should either sack the artist or go with it. Essentially, comissioners need to trust the artist.
Posted by Jonathan Evens at 00:25