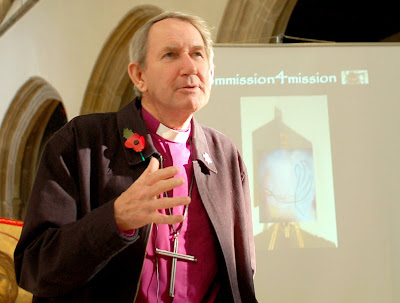 The Rt. Revd. David Hawkins, Bishop of Barking, spoke at commission4mission's recent Study Day from the perspective of those envisioning others on the commissioning of contemporary art for churches:

"All human beings are made in the image of God; everyone has creativity within them and, for Christians, that creativity becomes part of their worship whether conscious or not.
If we think of worship as liturgy, music, preaching etc, then we can see that much of the Church's worship and teaching has been through the visual arts. Teaching was, for example, read in stained glass, frescoes and mosaics. We need to help our congregations recognise that a large part of worship is non-verbal and that the visual arts and music often move people more than words. It is, after all, a visual world we live in.
commission4mission is deliberately saying that commissioning art is a mission activity and that is necessary because the narrative of the christian faith is no longer in people's heads. As a result, we need to make the story visual once again.
This Study Day has included discussions about finance and we need to face the question of whether commissioning art is an indulgent project in recession time. Times of recession, historically, have been when the Arts have flourished as we have a need for hope and inspiration. Modest expenditure can produce real inspiration.
Numbers 21. 4-9 is about the first piece of public art in the Judeao-Christian tradition; an artwork that was transformative and healing. The bronze serpent had a transformational integrity with the people of God in a particular place and started me thinking about God and context. It has similarities to the Angel of the North; which has been a symbol of inspiration in a depressed part of the country.
Two examples of collaborative commissions may help in taking these thoughts further. These were modest projects coming out of encounter with God and the people of St Georges Leeds. The first involved a major reordering during which Victorian balconies were taken out to reveal huge lancet windows with blank glass (where the balconies had been) above the stained glass (which had previously been all that could be seen of the windows).
I designed a panel to complete the Victorian stained glass which was contemporary but harmonising and worked with a stained glass artist to realise the design. The window was the culmination of a year of teaching to commemorate 150 years of the church. The theme for the window - the Tree of Life - was obvious because the theme of the year had been roots and shoots. The simple stylised design had a context and a sense of focusing and summarising an important year in the life of the church.
The second project involved the Crypt of St Georges which, since 1930, has been a night shelter and day centre for homeless people. Refurbishment of the Crypt involved replacement of the boiler and the clearing out of the old Victorian boiler room; a beautiful and still vaulted space. On seeing it cleared out, I immediately said it had to be a chapel and place of prayer for the Crypt.
Steve Simpson was the artist commissioned to create a work on a Last Supper theme with the work intended to be seen above a bench running all around the room and seating 12 comfortably. We envisaged a mural or a set of paintings but found that alot of collaboration - between the artist, Vicar and homeless users of the building - was needed to squeeze out something inspirational.
Steve brought cartoons of his ideas based on photographic images of the Crypt's users. These were rectangular paintings which made the space look like a gallery rather than a worship space. I suggested tearing the paintings up which he initially said he was not going to do but, after half and hour of debate, he started to tear around the images and they became like historical artefacts emerging as fragments from the walls. The time and agony of time taken on the problems of a committee relating to an artist; this process became part of the work of art. Because of the process, the work was altogether different but integral to the church space. It is therefore important to argue but to still stay friends.
These stories lead me to three final points:
1. The importance of collaborative process and finding real creativity which allows people to feel that their signature is there.
2. The scope for temporary art in churches which reflects a particular generation and period. We can all think of paintings or stained glass that have served their useful life but which can't be easily removed. Art can be for that time alone and can be created with the expectation that it will later be taken down. This approach can help to keep the relationship between art and faith alive and vital. It is similar to music, where some hymns go on forever while others go out of fashion.
3. Encouraging all kinds of people from our communities - not just Christians - to bring visual expressions into church, as a missional and outreach activity."
Posted by Jonathan Evens at 11:19