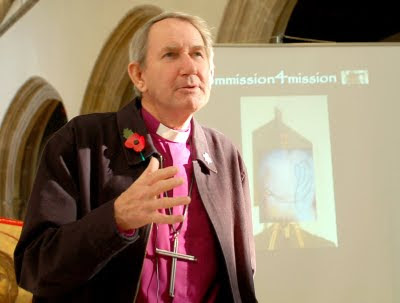 Bishop David speaking at our Study Day in November 2009

commission4mission is moving into an exciting future as we move into 2010. Our catalogue of artists is being distributed. We have new works underway for St Peter's Harold Wood, St Edmunds Tyseley and St Pauls Goodmayes. We are planning a Passiontide exhibition, a second Study Day and have offers of permanent exhibition spaces at two churches. During 2010 we will be joined by Helen Gould, who was formerly Director of Creative Exchange, to work on events and strategic development.

The Bishop of Barking, the Rt. Revd. David Hawkins, issued a call to re-engage with our visual heritage as a spur to mission at a Study Day on Church Art organized by commission4mission and held at Chelmsford Cathedral.

The Bishop argued that a large part of worship was non-verbal – visual or sound – and that the non-verbal aspects of worship often affected people more than the verbal. The Church in the past had taught the faithful through images in stained glass, fresco and mosaic and, because we once again live in a highly visual culture, we need to understand that the commissioning of art for churches is a missional activity.

He pointed to the story of the bronze snake crafted by the Israelites while in the wilderness (Numbers 21. 4-9) as the first piece of transformational and healing public art in the Judeo-Christian tradition and suggested that a work such as Anthony Gormley’s Angel of the North has had a similarly transformative integrity in a depressed region of the country.

The Bishop told two stories of commissioning, from his own parish experience at St George’s Leeds, to illustrate his argument. The first concerned designs which he as an artist priest developed to complete lancet windows which were part clear and part stained glass. The theme for these windows – the Tree of Life – arose naturally from a year of teaching on the theme of roots and shoots as part of the 150 year celebrations at the church. The Bishop’s design had integrity in the context because it focused and summarized a significant year in the life of the church.

His second example concerned a commission by Steve Simpson for a former boiler room in the crypt at St Georges which was to become a prayer space for the homeless project located there. The idea was for twelve paintings on a ‘Last Supper’ theme to be based on project users and displayed in the round above benching. These ideas, however, only came to life in the space once discussions concerning the work reached the conclusion that the images needed to be torn as though they were fragments of historical artefacts emerging from the crypt’s wall. As a result, the Bishop highlighted the importance of the collaborative process as a source of real creativity in commissions.

He also called for greater use of temporary artworks and projects. These would emerge from a particular generation and time but were not intended to become permanent additions to a church. Finally, he highlighted the significance of encouraging all kinds of people from our communities to bring their visual expressions into church. We are all creative, he argued, because we are all made in the image of God. Our creativity becomes part of worship, whether conscious or not.

The Dean of Chelmsford Cathedral, the Very Revd. Peter Judd, shared stories of commissioning a range of works from artists such as John Piper, Mark Cazalet and Peter Eugene Ball. His experiences were mixed as some commissions had proved very difficult with significant opposition encountered while others had come together very easily.

His first experience, of installing a Nativity window by John Piper at Iffley Church Oxford, was one of the most controversial and has recently been documented in a new biography of Piper and his wife Myfanwy (F. Spalding, John Piper, Myfanwy Piper: Lives in Art, OUP Oxford, 2009). The opposition that Judd encountered and the difficulty of agreeing an appropriate location for and extension to what was an existing work by Piper were eventually resolved and once installed the window became a greatly loved addition to a church already famous for its beauty and architectural interest. Judd ended by encouraging those present to trust the artist.

Among the highlights of commission4mission’s exhibition which accompanied the Study Day was Peter Webb's Architect's arguing over the Tower of Babel, a wonderfully detailed and witty take on a rarely depicted or imagined aspect of the story that has previously been included in a Royal Academy Summer Exhibition. Colin Burns' oils evoked a sense of calm and reflection that could well benefit a prayer space. Caroline Richardson's glass work Broken-Hearted was a strong statement working well with popular rather than explicitly Christian imagery. The Leader by Joy Rousell Stone and Henry Shelton's two Stations of the Cross pieces, by the energy of their brushwork and their semi-abstract nature, evoked a powerful sense of the violence of the Passion.

Harvey Bradley’s pottery incorporated ash (symbol of repentance) which after being fired became a textural gold colour. Sarah Ollerenshaw's large and epic meditations on suffering and sacrifice contrasted strongly with the deliciously delicate miniature that was Celia Ward’s Madonna.

The exhibition was the most comprehensive exhibition by commission4mission artists to date and with the range of artists and media included, gave a real taste of the exciting possibilities for churches wishing to commission contemporary Church Art.

More information about commission4mission can be found at http://commissionformission.blogspot.com/ or by contacting Jonathan Evens at: jonathan.evens@btinternet.com or 020 8599 2170.
Posted by Jonathan Evens at 13:18