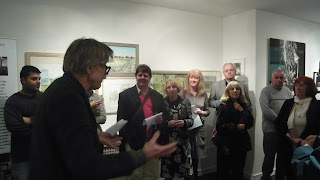 Christmas exhibition at the Tokarska Gallery 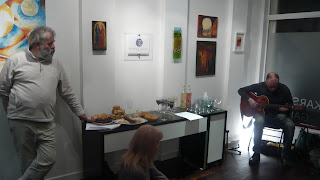 As part of the Private View Colin Burns performed guitar instrumentals from his forthcoming CD. Andrew Vessey read three poems that, like several of the paintings he exhibited, explore encounters and travels in well-known biblical stories but set into the context of contemporary landscapes of Suffolk and Gower. Peter Webb spoke about creativity as the essence of God in his introductory remarks and Jonathan Evens read his poem on the creative process entitled 'The Mark'.

Marisa Martin, writer of the 'True Colors' column on WorldNetDaily, featured c4m and the Tokarska exhibition in a piece entitled 'Anglicans invite artists back to church' (see http://www.wnd.com/2011/12/372561/). In her article, Martin noted that c4m works to keep alive the Anglican Church tradition of inspiring, commissioning and installing new art but "uses contemporary and decidedly non-traditional art" to do so. She highlighted particularly the work of Peter Webb and Christopher Clack, describing Webb's Supper at Emmaus as "something like a cross between Jack Levine's and Franz Hals' group scenes" and Clack's Descent II as "visually riveting, although spiritually neutral." The question that c4m poses, she suggested, is whether "new and contemporary symbols be found for the traditional images and doctrines of the Christian faith?"

Run With The Fire

A promotional presentation for 'Run with the Fire' is now available to be viewed on YouTube. The presentation outlines the project, shows examples of work included and gives information for ordering copies of the 'Run with the Fire' pack. Each pack includes: a digital exhibition on DVD with a 2 year licence for use in the purchasing church; an electronic book and planning aid produced by three experienced Christian event organisers, with samples and templates to save you time and effort; telephone, skype or e-mail support to help you use the pack effectively; access to a large pool of Christian artists who you may wish to involve in your project. 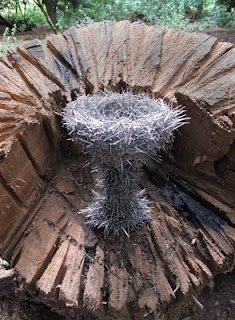 Robert Enoch's art is an exciting exploration of colour, form, movement and meaning. He makes artistic interpretations of the Bible in a visionary form and has made installations for the church that visually explore and interpret the Gospels. His films blend social documentary and corporate video. In his photographs he searches the environment for images of piercing meaning among the everyday. 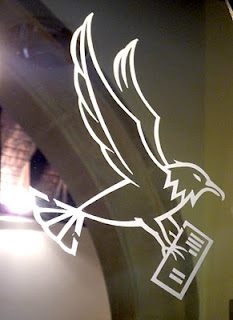 The second set of etched windows, etched by Richard Paton to designs by Henry Shelton at All Saint's Hutton, were dedicated on Sunday 4th December 2011 by Revd. Bob Wallace, Rector of the parish. The windows feature symbols of the four Evangelists complementing the earlier set of windows in the opposite screen which features symbols of seven Saints.

Our plans for 2012 include: work on three current commissions; a Central London exhibition as part of the Pentecost Festival; and our partnership project, 'Run with the Fire', with CANA and Veritasse for the Olympics.