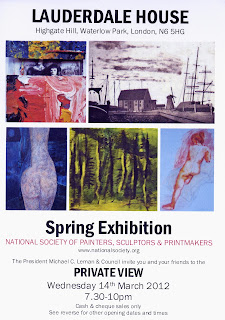 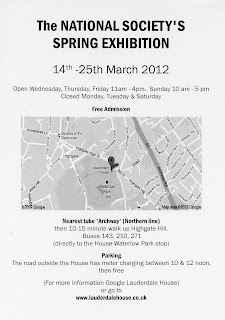 Michael Creasey and Peter Webb will both be exhibiting works in the Spring Exhibition of the National Society of Painters, Sculptors and Printmakers which is being held at Lauderdale House from 14th - 25th March. The Private View is from 7.30pm on 14th March.

Anna Alcock’s love stories and mythology started when she was young and continued to grow through her studies in South Africa when she majored in Classical Civilisations as part of her BA Fine Art (Hons) degree. She completed a MA Printmaking in London in 2004. She exhibits regularly and her art is in private and public collections around the world.

Anna Alcock uses Greek and Roman mythological images and populates them with modern day narratives that are of significance to her living in London now. The exhibition will also include an exclusive bound suite of 15 etchings, which will be exhibited alongside etching collages and tabloids of myths with personal modern day stories that she imbues with her unique style and bold colours.

By using her experience of London and applying ancient Greek and Roman cultural thinking the theme of mythology is applied to everyday events for example bankers loss of status during the recent recession is illustrated by the myth of “Icarus”. Archetypes are found in our unconscious daily lives as shown in “Demeter”, the story of a mother’s search for her daughter “Persephone” and the resulting winter of her grief.

Tokarska have also arranged a Taster Etching Workshop with Anna Alcock for 17 March (4.00 - 7.00pm) at the Gallery. All materials are provided. The workshop provides an opportunity to do your own little etching using ferric chloride and then printing it with an etching press onto 100% cotton paper. You get to take your prints and plate home. Booking is essential.
Posted by Jonathan Evens at 23:33