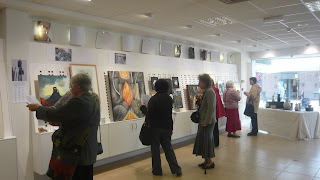 c4m pops up at the Barking Episcopal Area Arts Festival

A day on the visual arts was organised as part of the Festival with art talks, the Run with the Fire digital art exhibition and Harlow Seniors Photographic Society Exhibition at St Paul's Harlow plus a lunchtime reception at the commission4mission exhibition. The Rt Revd. Stephen Cottrell, Bishop of Chelmsford, outlined the background to Stanley Spencer's Christ in the Wilderness paintings before sharing meditations based on particular paintings in the series. c4m member Mark Lewis summarised the career of John Piper, highlighting his interest in abstraction, typographical content, war commissions, colour and contrast, stained glass commissions before ending with his murals including the Emmaus mosaic at St Paul's Harlow.
The final event in the Barking Episcopal Area Arts Festival also featured c4m members. Performance was an evening of music and poetry at Holy Trinity Hatfield Heath. Jonathan Evens opened the evening with a selection of poems that included The Mark and Worthship. Colin Burns performed songs and instrumentals from his Emerald and Gold album, as well as new material. Jane Grell read from her newly published Collected Poems Praise Songs. The first half of the programme was brought to a resounding conclusion by the Brass of St Mary's (Sheering) that included both Be Still and Those Magnificent Men In Their Flying Machines. Mal Grosch made a humorous start to the second half of the programme with poems from his new collection entitled Blackfriars. A choir from Holy Trinity and St Mary's reprised songs from the Roger Jones musical David. The evening's varied and thoroughly enjoyable entertainment concluded with songs, a poem and a story by Jane Grell. 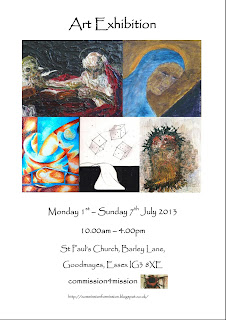 St Paul's Church Goodmayes (http://www.stpaulsgoodmayes.org.uk/) is to host an Art Exhibition for commission4mission - Monday to Sunday ~ 1st to 7th July 2013, open 10:00am to 4:00pm daily (Barley Lane, Goodmayes, Ilford, Essex IG3 8XE). Admission is free and light refreshments will be available.
The exhibition will begin with a launch night on Monday 1st July featuring artist presentations, Mark Lewis on the work of John Piper and c4m’s Annual General Meeting. Work by Ross Ashmore, Harvey Bradley, Anne Creasey, Michael Creasey, Valerie Dean, Elizabeth Duncan Meyer, Jonathan Evens, Mark Lewis, Danielle Lovesey, Caroline Richardson, Joy Rousell Stone, Henry Shelton will be included and much of the work shown will be for sale.
Visitors will also be able to see an installation on the theme of peace plus the significant collection of permanent commissions housed at St Paul’s. St Paul's has been a generous patron of the arts through the generosity of the PCC and many ad memoria by it's loyal and faithful membership throughout its history. The church is home for a large selection of stained glass and is also proud to own a set of contemporary ‘Stations of the Crown of Thorns' a series of 14 individual pieces featuring a large Triptych and commissioned from c4m.

The last day of the exhibition will coincide with the 'Our Community Festival'; an annual event co-ordinated by the London Borough of Redbridge. This will take place in Barley Lane Recreation Ground directly opposite the church and will run from 12 noon to 4:00pm on Sunday 7th July 2013. 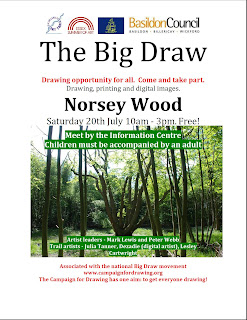 The Big Draw @ Norsey Wood
The Big Draw will be an event featuring drawing, printing and digital images at Norsey Wood, Billericay on Saturday 20th July, 10am - 3 pm. This free event will be a drawing opportunity for all who wish to come and is being organised by c4m member Harvey Bradley as part of the Billericay Art Trail. Artist leaders will be c4m members Mark Lewis and Peter Webb. Trail artists - Julia Tanner, Dezadie (digital artist), Lesley Cartwright. Meet by the Visitor centre. Children are to be accompanied by an adult. This event is associated with the national Big Draw movement - www.campaignfordrawing.org. The Campaign for Drawing has one aim: to get everyone drawing! The Big Draw will be followed by an Arts Evening at St. Mary Magdalen Billericay with Tim Cunningham and Jonathan Evens (poetry), Colin Burns (music) and Dezadie (animations) plus a dance group and projected images from the Big Draw (Saturday 20th July, 7:30pm - 10pm). 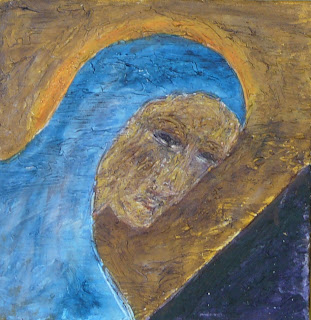 Stations of the Cross

An exhibition of 'Stations of the Cross' by Valerie Dean is currently at the Diocesan Office for the Chelmsford Diocese  (53 New Road, Chelmsford, Essex CM1 1AT) in the Boardroom at Guy Harlings until Friday 26th June. Visits are by arrangement during normal office hours, as the boardroom is in regular use. Please check access before you visit by ringing 01245 294400. Valerie is also exhibiting in Brussels during June.
Posted by Jonathan Evens at 11:51