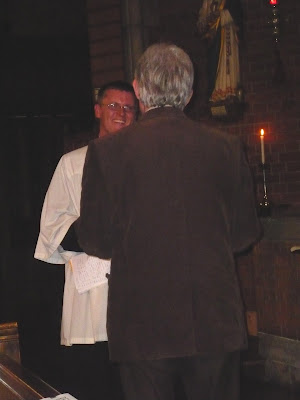 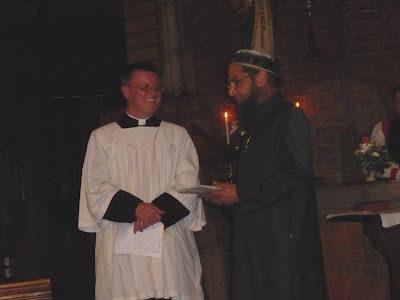 Father Steven with a representative from the local Mosque 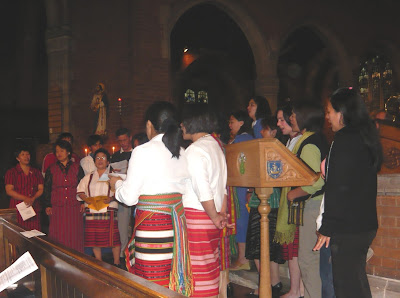 Tonight was a celebration of new ministry for Commission For Mission committee member Father Steven Saxby as he was licensed by Bishop David, Commission for Mission's Patron, as Priest-in-Charge of the parish of St Barnabas with St James the Greater, Walthamstow.

Steven has been tremendously supportive of Commission For Mission since its inception. He suggested our name, introduced Henry Shelton's work to the Waltham Forest Deanery, linked us up with St Andrew's Leytonstone, and in September will display Henry's Stations of the Cross in St Barnabas as part of the E17 Art Trail. Henry was among those community representatives welcoming Steven into his new role and did so on behalf of Commission For Mission.

The service was a wonderful reflection of the diversity of the Parish and the strength of Steven's Deanery, ecumenical and inter-faith relationships. He is someone with a vision for reconciling across differences. This is something that has been reflected in his personal choice of artwork for his new Vicarage; a Peace Tryptich by Br. Robert Lentz based on the meeting in 1219 between St. Francis of Assisi and Sultan Malek al-Kamil. A Franciscan flavour also featured in the service as today was the Feast of St Bonaventure and we sang All creatures of our God and king based as it is on St Francis' 'Canticle of the Sun'.
The service included a challenging sermon by the Rt. Revd. Keith Newton, Bishop of Richborough on the need for all Christians to be engaged in mission and move beyond the patronising stereotype of mission as something supported by us for those in other parts of the world. In illustrating these points he recounted Oscar Wilde's comment that missionaries are the divinely provided food for destitute and underfed cannibals as an example of the colonialist mentality towards mission. He also told the joke about the Jehovah Witness who was unable to explain his faith on being invited in to a home and offered tea and cake because he had never got that far before in order to make the point that it wasn't actually true and that Christians should be challenged by the dedication that Jehovah's Witnesses and Mormons show in sharing their faith with others.
As Steven faces the challenges of his new role and parish, we echo this prayer from tonight's service: Almighty God, give to your servant Steven grace to fulfil his ministry here. Give him reverence in celebrating the sacraments, faithfulness in proclaiming your Word, diligence in pastoral care, tenderness in comforting, power in healing the wounds of God's people, openness in receiving the ministry of others, and humility, self-sacrifice, and courage in all things. Following the steps of your Son, may he guide your people to eternal joy, through Jesus Christ our Lord. Amen.
Posted by Jonathan Evens at 15:39