Spirituality - the heartbeat of Art? (2) 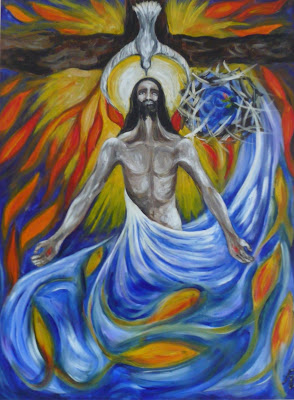 'The Baptism of Jesus' 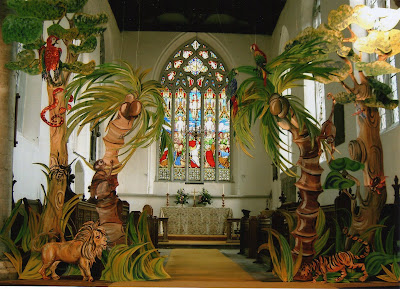 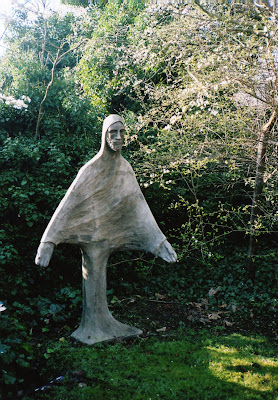 'Jesus in the Garden' 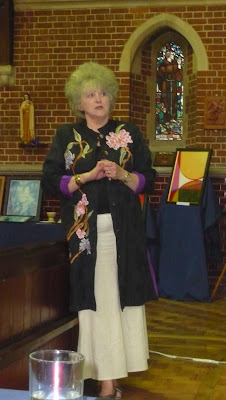 Rosalind Hore
In the second presentation from the Art & Spirituality networking evening at St Andrews Leytonstone, where three artists addressed the question 'Spirituality - the heartbeat of Art?', Rosalind Hore speaks about her work as the exaggeration of emotion:
Rosalind began her presentation by explaining that she grew up in a Church of Scotland manse and first remembers encountering Christian imagery through the Victorian images of Christ used in Sunday School at the time. She also developed early on a sense of being involved in the Church's year. She studied images of Christ during her sculpture course at Art College and was inspired by Michelangelo, El Greco, and Rodin.
She seeks to express exaggerated emotion in her work through the use of elongated stylized figures, strong colour and sweeping folds, which exaggerate both movement and emotion. She uses Christian symbols frequently in her paintings; flames, waters of baptism, doves, cross etc. Her Stations of the Cross each feature three rose buds as a sign of the Trinity. The Stations of the Cross have been a big influence on her and she has, to date, completed six bas-relief Stations and six paintings.
Her sculptures are all modelled and she works in clay, concrete and plaster. All of her sculptural work can be cast in bronze. Concrete and plaster involve use of an iron armature. Greater detail is possible when working in clay but, when working in concrete or plaster, shapes are simplified and greater use is made of sweeping folds and lines.
Rosalind has also produced a number of functional pieces for Church festivals and to enhance worship. These have included meditative pieces for Good Friday devotions and Festival displays. She retired from art teaching four years ago but, as a Rector's wife, has initiated an Art group at each church they have ministered in. The current group at St Laurence Upminster have a permanent display board in church with a changing display of work to reflect the seasons.
She said that art and faith are why she gets up in the morning and that the whole of her life is involved with these two things.
Rosalind ended by showing images of her work (see representative examples above) and spoke about each piece in terms of its imagery and inspiration. To illustrate the interaction in her work between inspiration and worship she spoke of being inspired to create a Corpus Christi image by paying attention to the priest holding the host and cup during the Eucharist. She said that non-religious themes can also provide a sense of spirituality particularly through the joy in creation of a still life or landscape.
Posted by Jonathan Evens at 00:42