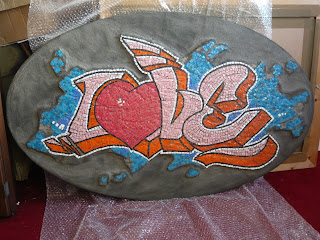 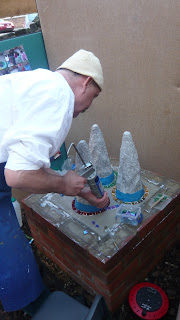 Commissions are regularly being discussed, explored and developed through commission4mission. We currently have two which are rapidly approaching completion.

St John's Seven Kings have commissioned two mosaics as part of the development of their community garden. These were envisaged as bold, bright works to catch the eye of passers by and draw them into the green space of the garden. Viki Isherwood Metzler has re-created her Graffiti Love design for display on the East wall of the church, while Sergiy Shkanov is currently adding a mosaic to the Trinity sculpture in the remembrance area of the garden. This design of circular and triangular lines connecting three granite shapes is intended to symbolise the constant exchange and interconnections within the Godhead. The church hope to have both works installed for their Patronal Festival this Sunday when they can be dedicated by the Bishop of Barking.

A faculty has been obtained for a second set of windows to be etched by Richard Paton to designs by Henry Shelton for a screen at All Saints Hutton. On this occasion, Henry Shelton's designs are of the four evangelists. The new windows will be located opposite those of the original commission.

Other commissions currently being designed and developed include a holy water stoup by Mark Lewis and an altar frontal by Anne Creasey. Additionally through the art workshop, which was held at St Paul's Harlow and led by Robert Enoch and Dr Philip Jenson during our recent Study Day, we have developed a design for a temporary freize at St Paul's which will tell the big story of the Bible.
Posted by Jonathan Evens at 14:11