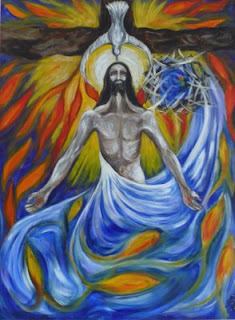 'The Baptism of Jesus' by Rosalind Hore has been installed at St Edmund Tyseley and a date is being sought for the dedication of the painting which has been donated to the church by Jonathan Evens in memory of his father, Rev. Phil Evens, a former Vicar of the Parish. 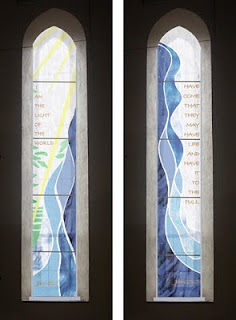 Caroline Richardson has begun work on the windows which she has designed for St Peter Harold Wood. Her two windows show complementary images containing John 10.10 (I have come that they may have life and have it to the full) and in the other, John 8.12 (I am the light of the world). 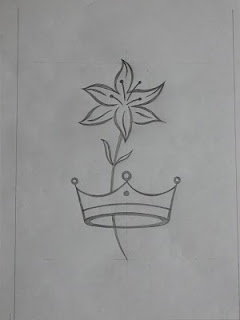 The faculty has been obtained for the etched glass windows designed by Henry Shelton for All Saints Hutton. Each window will celebrate a different saint using Shelton's trademark minimal but flowing lines to form symbols of each saint.

A faculty is being sought for a sculpture in the new community garden at St John Seven Kings. This sculpture which has been designed in discussion with the community garden planning group incorporates a mosaic which will be created by Viki Isherwood-Metzler.

Mark Lewis has had an initial design for a holy water stoup approved by St Margaret Great Ilford and is also undertaking research for the Art Trail which commission4mission is creating for the Barking Episcopal Area. Mark has identified 40 churches in the Episcopal Area with artworks which may feature in the Trail. These include work by artists such as Hans Feibusch, Eric Gill, John Hutton and John Piper.

Submissions are being sought for Run with the fire, an Olympics-themed art project instigated by CANA, commission4mission and Veritasse. The project will create a virtual exhibition of international artwork for presention alongside Olympics-themed arts events or exhibitions organized by local churches in 2012. The closing date for submissions is 19th November and each submission will be considered by a jury/selection committee invited by the steering group which includes Dianne B. Collard (Director of Ministries - Europe for Artists in Christian Testimony International), Martin Crampin (Artist, researcher and designer), and Marleen Hengelaar-Rookmaaker (Editor-in-Chief of ArtWay).
Posted by Jonathan Evens at 15:17